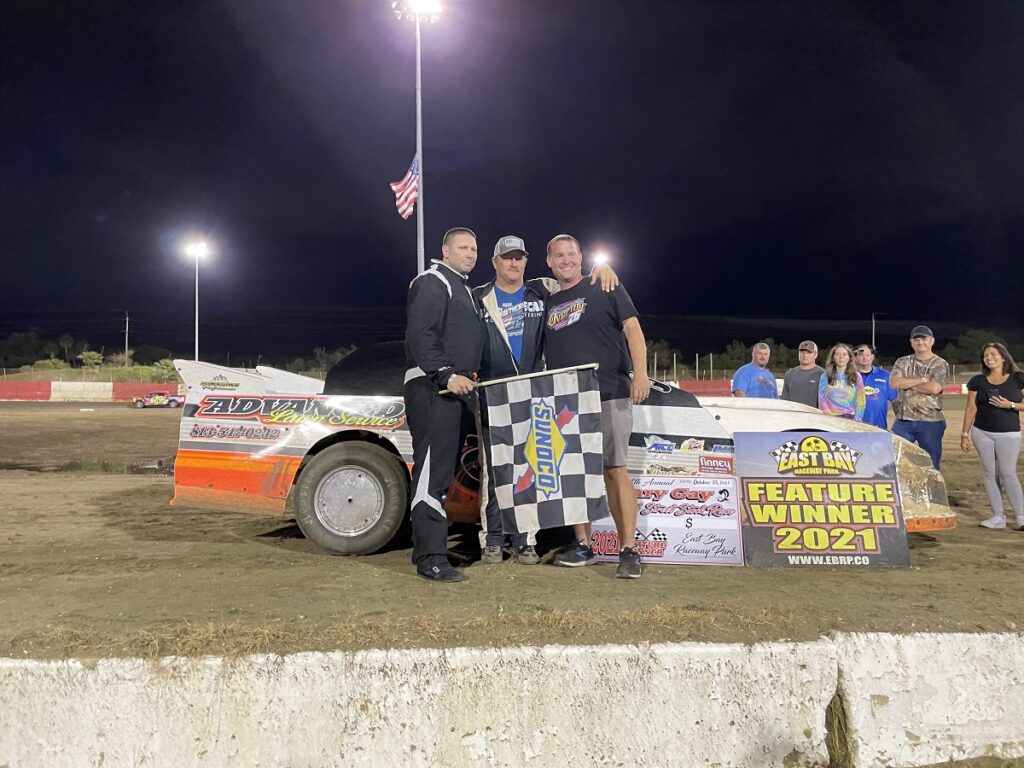 After Mother Nature won the first few nights where the Gary Gay Memorial was scheduled for 2021, a perfect night of racing developed on Saturday night and the annual event drew nearly 20 of the top Street Stocks in Florida.

Three heat races were held with the top two finishers in each race locked into a dash to determine starting positions for the feature. Rich Livernois Jr. ended up with the last draw and came away with the pole for the dash, but the event went to Jimmy Baker, who inherited the pole for the 25-lap main.

Livernois had the lead by the time the field came around to complete the first lap with Baker in tow. Defending Gary Gay Memorial winner Tim Powers was in hot pursuit in third as the field maintained a fast pace. Lapped traffic entered the picture on lap seven, but the first caution appeared at that point. On the restart, Baker chose to line up outside, but was not able to slip around Livernois. On lap 12, Tim Gay spun in turn two, collecting David McCormack and Paul Davis. On the restart, Powers moved around Baker for second, but a hard-charging Jerry Bruce, who had started 18th in the last row, was on the move. A lap 19 spin put Bruce beside Powers on the restart and Bruce seized the opportunity to vault into second. As the field was approaching turn two, Powers spun in the middle of the track collecting 10 cars. Most were able to continue, but Livernois would continue his effort and pick up his fifth East Bay feature of the season. In his Victory Lane interview, Livernois recalled how he said during the Winternationals how he had hoped to win a special race. Ironically, the car he drove to victory had been purchased two years earlier from Tim Gay.

The night saw two new faces in Victory Lane. Chris Kennedy made a pass on lap 10 of the Q Auto & Injury Medical Malpractice Attorneys Micro Sprint feature, slipping around leader Doug Dyal, to notch his first win. The driver who recently relocated to Florida from Harrisburg, Pennsylvania was making his second start in this car. Kennedy shared in Victory Lane that the day started with the burial of his grandmother and this victory held special meaning. Earlier in the night, Kaylee Dyal won her first heat of the year.

In the 602 Late Models, John Wayne Haynes was finally able to prevail for the 10-lap main. Haynes, who had finished second when the class last raced, held the lead the entire way and began pulling away from Austin Leamon by the fourth lap. Haynes also won the heat.

Rodney Martin made a triumphant return to Victory Lane, taking an outside line around Charles Paris Jr. and pulling away for the 15-lap win. Martin, who had won the opening night feature, has been in the top three of the Gladiators point standings throughout the season, currently 25 points behind Paris with four races remaining. Callie Gubich, who finished a career-best fifth in the feature, and Robert Kissam won their heart races. Following the feature, eight drivers participated in a special “Bump Challenge” with Patrick Tabb defeating Kissam in the final race.