The staff and management of East Bay Raceway Park would like to extend sympathy to the friends and family of Chaplain Bill Ross, who passed away at the age of 84 on June 29.

Chaplain Bill was a fixture on the racing scene, who loved people and especially racers. He was a friend to many through his  years of service and provided comfort to those in need. He was often accompanied at the racetrack by his wife of 49 years, Erika.

For the second consecutive week, inclement weather has forced cancellation of the racing program.

East Bay will return to action on August 7. See you then. Be safe!

Due to track conditions from the rain that has fallen (and continues to fall), the June 19 program at East Bay Raceway Park has been cancelled. Action will resume on Saturday, June 26. 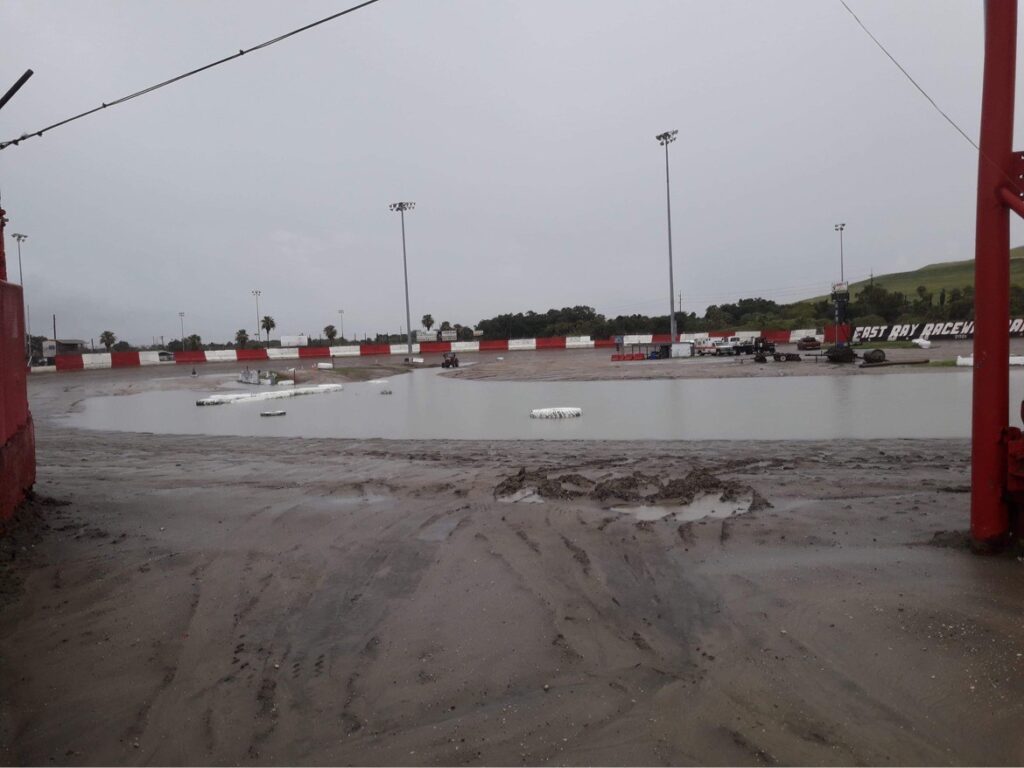 At the conclusion of the V-8 Warrior main event, a protest was placed against winner Michael Hart, who was found to be in violation and disqualified. Following that, a claim was made against the car of second place finisher (now winner) Nick Brown. At the time, the claim was allowed, but a review of the track rules indicates that a claim can only be made against a car that finishes ahead of the claiming party. Since the claim against Brown was made by the team that crossed the line first, you cannot “claim backwards”. 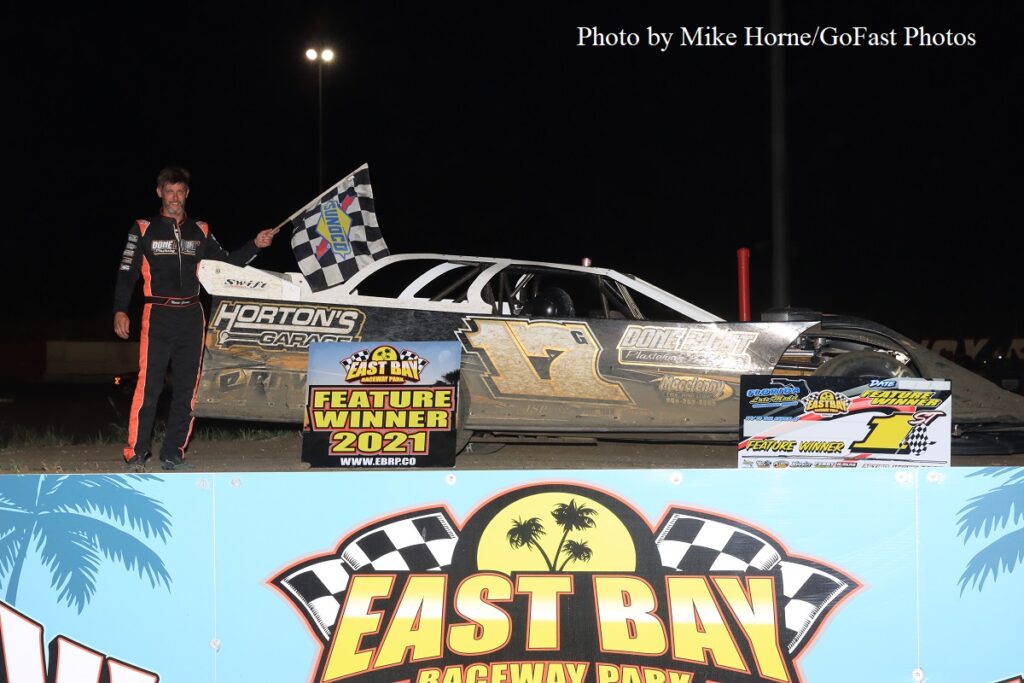 Heat winner Nevin Gainey held the pole for the 25-lap main event as the 14-car field rolled off turn four for the green flag. Gainey wasted little time in building up a lead as the field began to string out in the early stages. Travis Varnadore held second, but only for a lap as Shan Smith, also a heat winner, worked around him for the second position on lap two. Smith set off in pursuit of Gainey, who hit lapped traffic by the fifth lap. As the laps ticked off under green, Smith would gain ground, only to slip back negotiating turn two. Gainey was picking his spots to bypass fellow competitors and this gave Smith a new chance. The lead duo was catching up to Waylon Haynes and Matt Herlong battling for position on lap 15 when a caution waved for a Thomas Burnside spin. On the restart, Phillip Cobb took over third, but the front two cars were able to keep the defending track champion from becoming a factor. Smith raced hard to catch Gainey and, on the white flag lap, looked poised to make a move. Gainey stayed committed to his line and charged home with the win.

The victory was Gainey’s second consecutive Florida Late Model Challenge Series win as the Fort White, Florida speedster took over the points lead in the series. Prior to the race, Gainey and teammate Richard Ferry were tied for the top position. Ferry claimed seventh in the main event.

William Burnside opened the night by parking his Q Auto & Injury Medical Malpractice Attorneys Micro Sprint in Victory Lane for the second time this season. Burnside was able to lead the entire race, but not without challenges from Mike Meyers and heat winner Doug Dyal. Burnside was up to the task in claiming the 15-lap win.

Richard Livernois Jr. went wire-to-wire in a 15-lap Street Stocks that nearly went caution free. The only caution came out on lap 14 for a Phillip Ellis spin, resetting the field and putting a hungry Jerry Bruce in a position to make a difference. On the restart, Livernois carried the lead into the first turn, but then saw the car push up in the second turn. Bruce saw the opening and attempted to power by, but heat winner Livernois would prevail. It marked the second consecutive week that Livernois and Bruce finished 1-2 in the main.

The V-8 Warrior main event became a classic example of “things aren’t always what they seem.” On the track, Michael Hart was able to hold off George Handy and  second-place finisher Nick Brown after Hart had taken over the top spot on lap 7. At the finish, Hart crossed the line first, but a protest on a suspension part nullified the victory. The win was Brown’s fourth of the season.

The Gladiator feature got off to a slow start, but once the action was underway, it became intense. David Zeman possessed the early lead, but only until Wayne Kissam slipped by on the second lap. The best racing was not for the lead as defending track champion Daniel Bowman held off numerous competitors who wanted to take away his second-place position. Deeper in the field, drivers were mixing into the top five with position changes on nearly every lap. Bowman finally yielded second spot to Dalton Goldhammer, who had to over come adversity to have a chance. Goldhammer had a flat at the start of the race, but the crew was able to get the car back on track without losing a lap. He was then caught up in a lap two crash, but soldiered on. The end result was a second-place finish behind Wayne Kissam, who scored his second win of the year. Bowman and Rodney Martin were earlier heat winners. Second-year driver Callie Gubich scored her first career heat race win on the eve of her birthday. 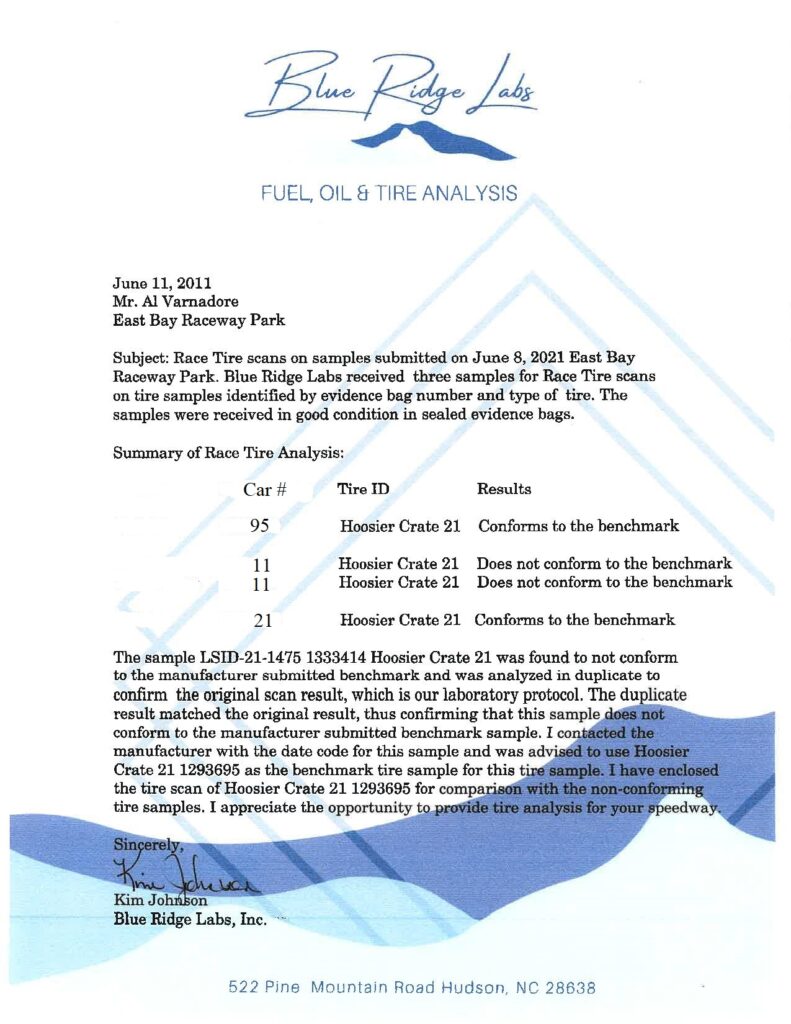 Children 12 & under free with paying adult 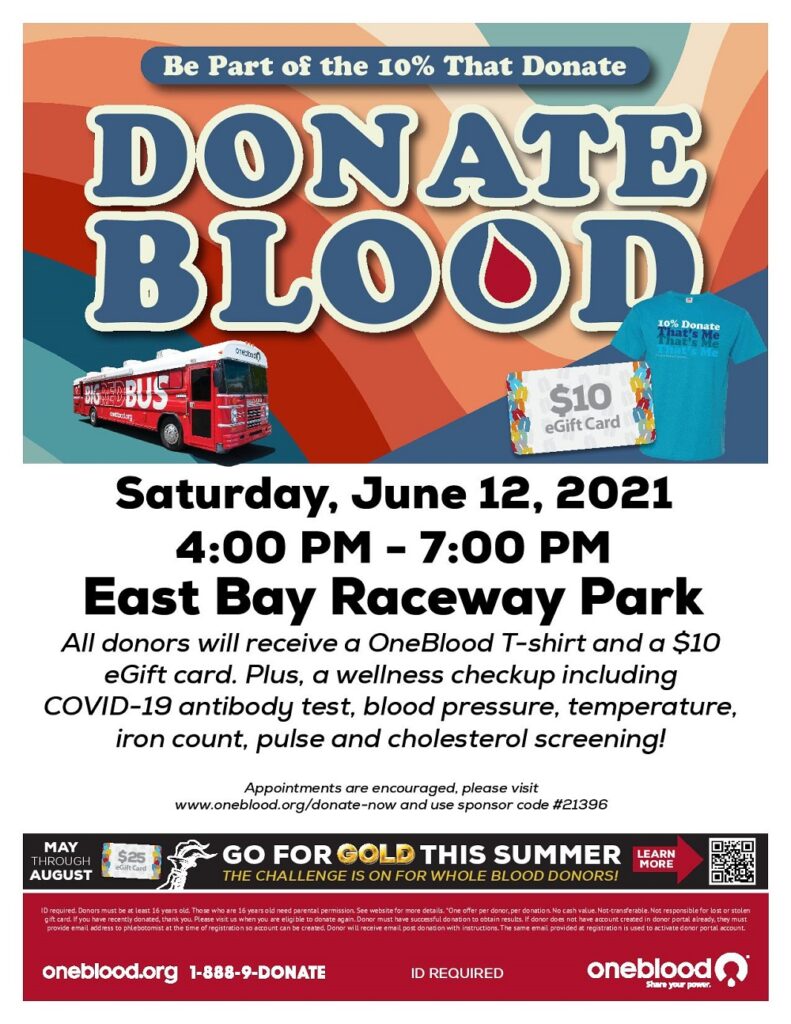