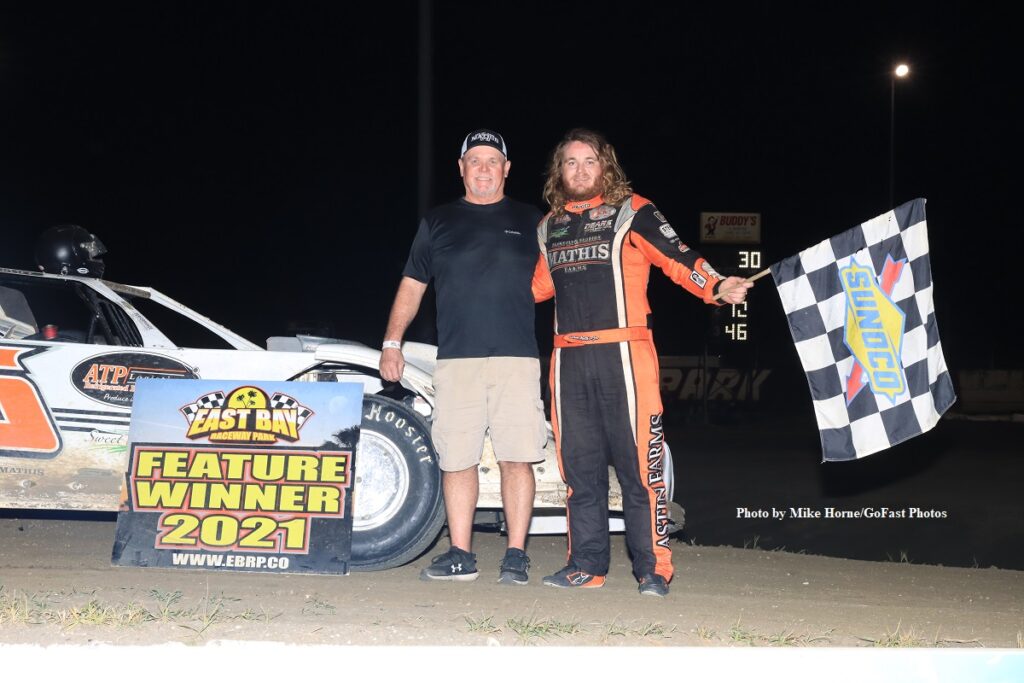 A seven-division program greeted the fans who gathered in mid-October to witness the Saturday night racing with the third event of the month on tap. Three new winners made appearances in Victory Lane throughout the night.

Steve Mathis Jr. had to hustle past early race leader Jack Nosbisch Jr. at the halfway mark of the 30-lap 604 Late Model main to move to his first win of the year. Mathis started seventh on the grid and began to pick off competitors as polesitter Nosbisch eased out to a lead in the first five laps. Josh Peacock gave Mathis all he wanted to protect his spot, but Mathis was able to sneak by into second. On a lap 14 restart, Mathis took advantage of a slight bobble by the leader, proving races can be won by those who put themselves in a position to make a winning move. The win came on the heels of an earlier Mathis heat race. Keith Nosbisch claimed the other preliminary.

Mark Moniz ran a strong race in a hotly contested Outlaw 4 feature. Moniz lost his lead on lap 10 to Billy Dukes, but came right back to take the lead on the next circuit. As the lead duo faced lapped traffic, Moniz swooped down in front of Dukes to prevail over the final laps. Eric Knight and Vernon Hart kept racing interesting in a clean duel for third.  Moniz commented that it had been a while since he had been in victory lane and thanked many, including the competitors who made such a great race, Hart and Dukes were winners of the six-lap heats.

Gary Lucas claimed the V-8 Warrior main, his first of the season, on Saturday night as he was celebrating his birthday. Lucas made an inside pass off turn four on race leader George Handy to claim his spot in front. Handy and Mark Roadarmel were winners of the preliminaries.

The program opened with the Mod Lites back for another round as point leader Alex Cline claimed his third feature of the season. Cline had built up a good lead, but experienced some anxious moments late in the race by making heavy contact with a tire barrier. Undaunted, Cline motored on to the win, backing up an earlier heat race victory. Brian Teeters, who won a heat race, gave pursuit to again finish second in the division.

The Q Auto & Injury Medical Malpractice Attorneys Mini Sprint feature looked like it was going to be back to back for Bryce Comer, but Comer retired on lap six with front end damage on his race-leading race car. The unfortunate turn of events put Kenny Brewer in front and Brewer capitalized on it to roll to his second win of the year. Brewer and Bruce Comer added heat wins.

Austin Sanders weathered several restarts to prevail in the Gagel’s Modified 15-lap main. Sanders, who gathered in his third win of the year, settling it to hitting his marks throughout the race, confident in his race car’s ability to go where directed. Garret Stewart and Roger Crouse claimed heat wins.

Racing continues October 23 with Street Stocks competing in the Gary Gay Memorial, offering $700 to the winner. They will be joined 602 Late Models, Q Micro Sprints and Gladiators. Youngsters are invited to join the drivers on the frontstretch at intermission for the annual East Bay Trick or Treat.