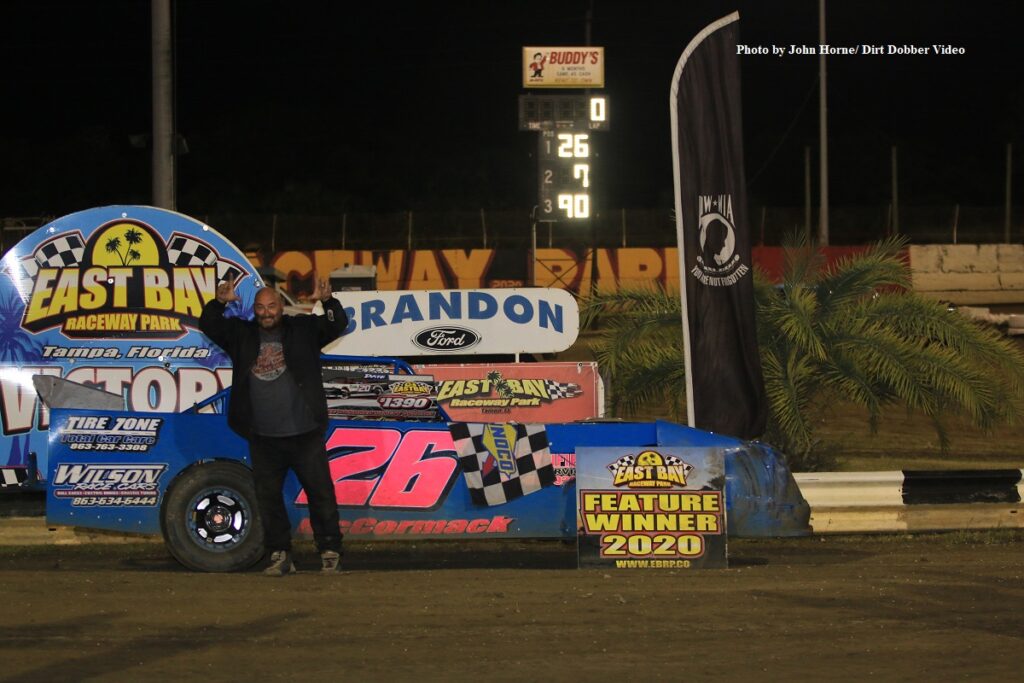 A field of 30 Dirt’s 4 Racing Street Stocks gathered Saturday night at East Bay Raceway Park for the third annual Gary Gay Memorial race, which would pit a 24-car field into a 35-lap battle.

The top four finishers in each of the heat races moved on to the main event, leaving 14 cars to compete for the final eight spots. Heats were won by 2018 Gary Gay Memorial champion Tim Gay, top D4R Street Stock contender Brian Morgan, Zack Amundsen and Justin Rodgers. Paul Davis would prevail in the 12-lap B main.

Gay and Morgan would lead the field to the green for the start of the event, which was slowed for an incident and led to a complete restart. When the green came out to stay, Gay had the lead as Amundsen proved to be the first challenger. Morgan would soon slip by to grab second. A lap seven restart gave Morgan the opportunity he wanted as he bypassed Gay for the lead. Defending race champion Tim Powers added his name to the list of contenders, grabbing second on lap 10. Gay and Powers would swap positions throughout the next 10 laps as Morgan tried to get away from the battle.

On lap 19, Gay charged to the outside to bypass Morgan for the lead. Morgan was biding his time and hitting his line, waiting an opportunity, which came on lap 24. Morgan got back in front, but it was a short-lived advantage as Gay returned to the top spot. It would be Morgan’s turn a lap later and he would stay in charge while Powers slipped past Gay on lap 27. As the field came to the white flag, Powers vaulted past Morgan and the two set off for an exciting conclusion. Powers would not be denied and came home with the $1,390 winner’s share.

Powers revealed in Victory Lane that he had retired, his old car was the one Brian Morgan was driving and he had no intention of competing in the race, planning only to support the competitors and the Gay family. Unfortunately, David McCormack, who normally drives the car Powers took to Victory Lane, was ill and asked Powers to fill in as a last-minute substitute. Powers may retire again, but, if he does, he goes out a champion.

A field of 18 Pro Late Models gave a thrill to the Saturday crowd as fast-paced action dominated the 30-lap feature. The race went 21 laps before seeing the first caution with action all around the speedway. Steve Brendle had the early race lead until Keith Nosbisch swooped by on lap 8. As the race stayed green, Jeff Mathews closed in and Ivedent Lloyd added another dimension to the top three challengers. When the caution flew for Thomas Burnside, the field bunched for a dash to the finish. It took one lap for Mathews to assert himself to the lead and move on to his second Pro Late Model main event of the season. Heat races were claimed by Nosbisch, Tanner Cobb and Mathews.

Defending track champion Robby Hoffmann returned to action as a fill-in driver for Bruce Comer and made his way back to Victory Lane. Hoffmann, whose lone previous appearance in 2020 also resulted in a feature win, had to deal with tough competition from Jamie Tinkham in the early stages of the race. Tinkham and Kenny Brewer were best in the heat races.

Patrick Tabb notched his third win of the season in the Gladiator main event. Tabb slipped past Wayne Kissam to cruise for the win, adding the main event to his earlier heat race win. Rodney Martin also gathered in a heat victory.

Racing action resumes on Saturday, October 24 with the Gagel’s Open Wheel Modifieds, Outlaw 4s, V-8 Warriors, Q Micro Sprints and Gladiators. It will also be “trick or treat” night as children will be visiting cars on the front stretch for candy with social distance protocols in effect.