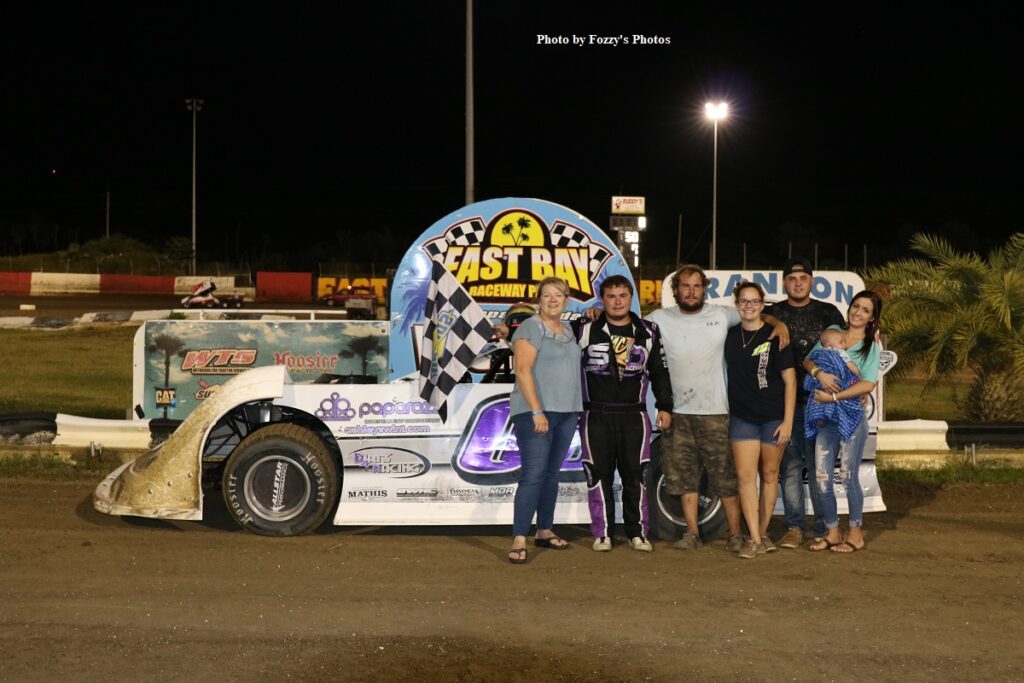 A thrilling father-son shootout dominated the Late Model Sportsman main with a married couple grabbing victories in V-8 Warriors and Gladiators in the Saturday night action at East Bay.

In the Late Model Sportsman race, two-time feature winner Tanner Cobb led the field to the green flag and grabbed the early lead. Steven Brindle held second, but faced an immediate onslaught from Tanner’s father Phillip, who started in fifth. Phillip Cobb was able to move into second, but Tanner had built up a lead to make the job more difficult for anyone in pursuit. As the laps began to wind down, the distance closed until the two were racing side by side throughout the entire run. Phillip nosed ahead slightly, only to have Tanner charge back. As the white flag came out, Tanner was in front but Phillip had designs on settling it once and for all. Tanner would prevail in a race that saw the drivers never make contact with the other despite the intensity. The Victory Lane celebrating saw a grinning runner-up offering congratulations while the fans roared their appreciation. Phillip Cobb and Megan Meyer had won the division heat races.

Michael Hart claimed his first feature win of the year in V-8 Warriors, keeping his car at the front of the field throughout the competition as Nick Brown and Jason Burnside occupied each other in a bid for second. Hart, who won his heat race earlier, parked in Victory Lane where was joined by his wife, Brittany. For the first time this year, Michael and Brittany would be racing on the same night, so Michael’s win gave Brittany addition inspiration for the Gladiator main. Juston Meeks had won an earlier heat race in the class.

About that Gladiator main…Yes, Brittany did win her feature event, becoming the first female winner of the class this season. The race turned out to be a two-car duel from start to finish between Brittany and Daniel Bowman, both of whom had won their heat races. Bowman tried several different lines of attack, but Brittany envisioned the opportunity to be the one getting the Victory Lane picture holding the flag with her family and friends. That was enough to drive her to the win in the night’s finale. Alyssa Grant also won her heat race.

Steve Diamond Jr. racked up his third Q Auto & Injury Medical Malpractice Attorneys main event of the season, acknowledging the hard work of his crew and the intense competition found in the class. Bryan Eckley, who won his heat race earlier, made an early bid to chase down Diamond, but the leader was using consistent lines and steady racing through lapped traffic to secure the win.

Defending track champion Brandon Yates returned to competition in the Outlaw 4s, utilizing his sister’s car since his had been sold. Yates quickly picked up the feel for the car and parked in Victory Lane in an affair that saw early attrition due to crashes and penalties. Billy Dukes and Stephen Hohlbaugh were best in class for heat races.

The Q Auto & Injury Medical Malpractice Attorney Micro-Sprints were dominated by four-time winner Paul Seburn, who grabbed the top position on lap two. Joshua Davis won his first race of 2020 by topping the field in the heat race.