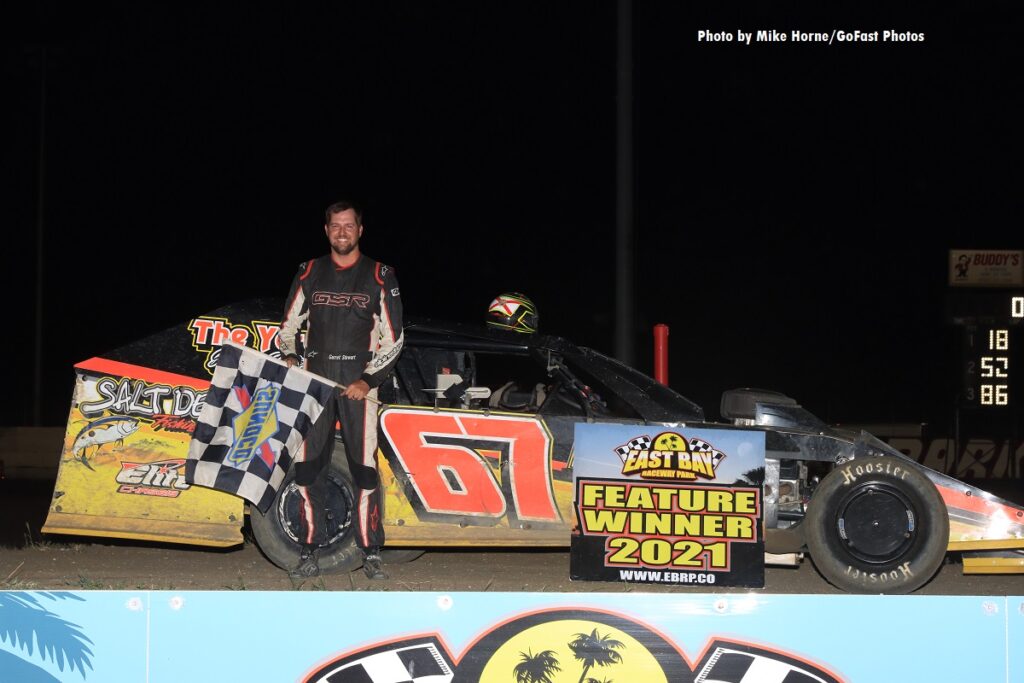 A warm May Saturday night led to a good crowd on hand as the 2021 East Bay Raceway Park season rolled along with a five-division program.

Garret Stewart used the outside line to take command of the Gagel’s Modified 15-lap feature in his first appearance at East Bay in 2021. Early race leader Bryan Bernhardt held the early point until a restart near the mid-point of the race. Stewart, who was running second, chose to take the high line in the Ybor City-style restart, giving the bottom to third-running L.J. Grimm. It was Grimm who made the move to slip Bernhardt to second on lap 8 as Stewart stayed committed to the top. Three laps later, Stewart used that line to chew out the lead on Grimm and hold it to the finish. Stewart and Mavrick Varnadore opened the night with heat wins, each making their first start of 2021 at the track.

Nick Brown became a return winner in the V-8 Warriors, but not without seeing challenges throughout the contest. Mike Wilson provided the first threat to Brown’s lead, but Wilson had his own battle going with heat winner Derek Gray. Brown was able to move away, but the real charge was coming from Jason Burnside who started inside the seventh row and steadily worked into the top five. With only two laps to go, Burnside had closed to Brown’s bumper, but could not find a way by. Brown backed up his earlier heat win with the feature victory.

Doug Dyal scored a heat win, his fourth in as many weeks, and captured his third A main in the Q Auto & Injury Medical Malpractice Attorneys Micro Sprints. Dyal was able to slip past race leader William Burnside, who was experiencing issues due to a shock, which gave Dyal the green light to pull away for the win.

Brandon Yates backed up a heat win with his third feature win of the season in the 602 Late Model class.

A field of 25 Gladiators took the green flag for their 15-lap main after Jerry Moore, Wayne Kissam and Robert Kissam topped heats. Tracy Maynard took the early advantage as the field began to settle in for the early laps. Wayne Kissam was bursting through to challenge, but it would not take long for Robert Kissam to bring his new car to the lead. In just the third race in the car, Robert Kissam added his name to the list of winners in 2021.

The next action will be Saturday, May 29 with Q Auto & Injury Medical Malpractice Attorneys Sprints, V-8 Warriors, Street Stocks, Mod Lites, Q Mini Sprints and Gladiators to close off a busy month of May.