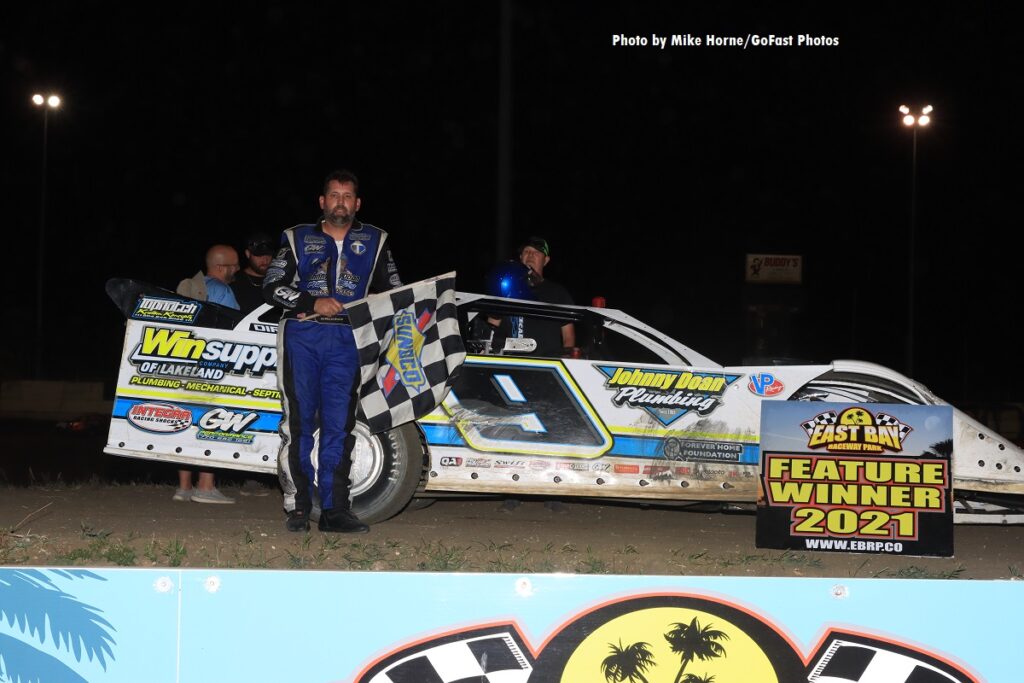 A first-time winner crossed the line in front at the checkered flag in the 604 Late Model main event as Jimmy Waldrop brought home the victory. An emotional Waldrop dedicated his win to the late Bill Crouse, who was instrumental in Waldrop’s involvement in the sport. Tonight’s winner had been on the short end of tough breaks in the past racing action, but there was no denying him on this night. Waldrop had to re-take leader Doug Horton on lap 6 to get out front in the 30-lap main. From that point, contenders would close on occasion. At one point, Steve Mathis Jr. slipped beneath Horton and closed up to show his nose to the leader. The move only inspired Waldrop who powered on to claim the win, giving him valuable points for the Crate Racing USA standings. Waldrop and Horton also claimed their heat races.

Rich Livernois Jr. backed up a feature win from earlier this season to become the second two-time winner in the division in 2021. The winner chose to go to the top of the race track and let those who chose to battle on the bottom. Runner-up Thomas Pratt gave a late race effort after moving from fourth to second on the last restart, but ran out of time as the gap was closing. Pratt and Zack Amundsen started the night with heat wins.

Defending Outlaw 4s champion Stephen Hohlbaugh scored his second win of the year, topping the field in the 15-lap main. Hohlbaugh hunted down early leader Mark Moniz to take the top position on the fourth lap. The feature win backed up the earlier heat race victory, giving Hohlbaugh the clean sweep in the division.

Two-time and defending Mod Lites track champion Austin Martin equalled his 2020 win total in just his third appearance with Martin bringing home a second feature win. Martin, who had won the heat earlier, found himself starting in the third row. Using the strategy to get to the front as quickly as possible, Martin wasted little time assuming command by the third lap. Former feature winner Darren Bass joined Martin as heat race winner.

Bruce Comer pointed out that he had been without a win in competition in the Q Auto & Injury Medical Malpractice Mini Sprints until November of last year. Since that point, only his absence for the class competition has kept him out of Victory Lane as he scored his fourth win in as many tries. Comer had to get by a strong early effort by Charles Silva, who was rebounding from a crash two weeks previous. Comer did get to the front of the sixth lap to cruise home with the win. Jo Jo Davis opened the night with his first heat win of the year. Comer added his third preliminary to his personal total.

Danny Bowman scored the double by winning the heat and feature in the Florida Old Time Modified portion of the program.