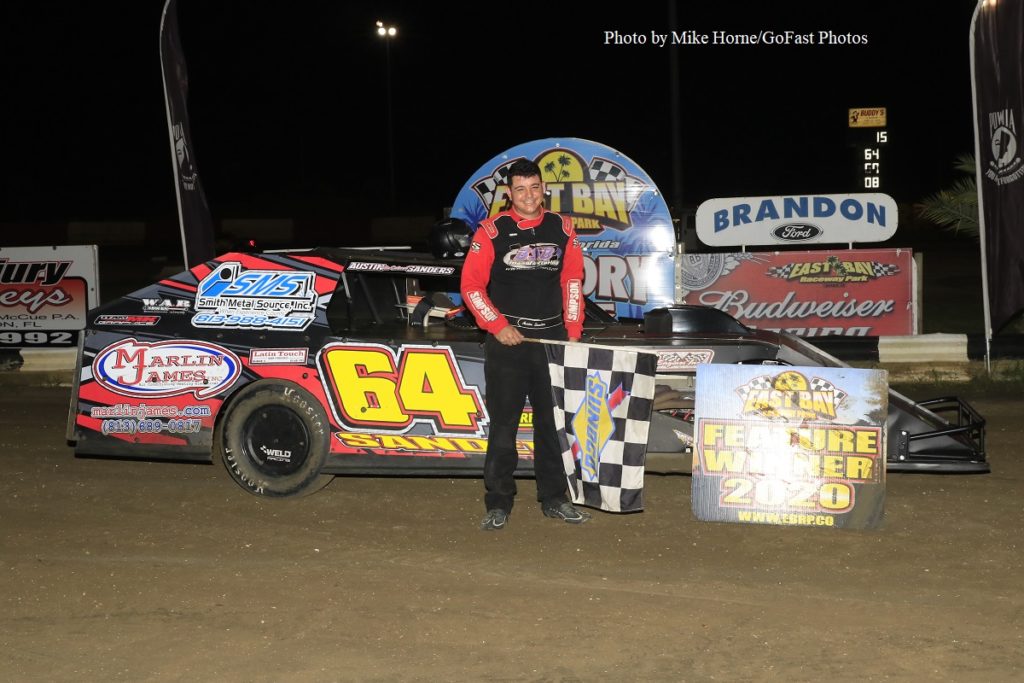 After 13 weeks of inactivity, the spectator gates at East Bay Raceway Park opened for competition and the crowd was hungry for action. The program featured six divisions, each making their second appearance of the year, bringing 85 cars for the action.

A brief rainshower struck as the first Gladiator heat was lined up and parading, leading to a 45-minute delay that did not diminish the spirits of Competitors and fans in attendance.

In the Gagel’s Open Wheel Modified main, Austin Sanders led the field from start to finish, but faced several challenges throughout the contest. Sanders held off the charge of Drew Jackson in the early stages, who had his own battle with Billy Howard. Howard dropped out of the contest with mechanical issues and Jackson could not hold off the charge of Jimmy Baker. Baker managed to get a nose close to Sanders but could never secure the pass as Sanders took the checkered in the 15-lap main. Sanders joined Jackson as heat winner.

Tanner Cobb became the first double winner of the 2020 season backing up a March win in the Late Model Sportsman class with a victory in June. Cole Crawford grabbed the early lead, but lost the handle and forfeited the top spot on lap 3. Cobb inherited the top spot with Jesse Brown and Kenny Monahan in tow. Monahan slipped by and closed in on Cobb. Catching a driver is one thing, but passing is an entirely different matter. Cobb cruised to the win. Tim Dowling and Thomas Burnside prevailed in the heat races.

George Handy became the second driver to secure a repeat win by topping the field in the V-8 Warriors. Handy dutifully started the 15-lap main at the back of the 13-car field and marched steadily to the front. George Christensen took the early lead, but had an issue on lap three, handing the lead to Bill Whitney. Gary Lucas took over two laps later and saw a big lead wiped out by a lap 11 caution. On the restart, Handy was able to move by Lucas, who wasn’t content with second. Lucas kept the pressure on, but Handy claimed the win by a carlength. Wayne Kissam and Randy Shields were heat winners.

Doug Dyal, who won two feature events in 2019, notched his first of the season in the Q Auto & Injury Medical Malpractice Attorneys Micro Sprints. Dyal shot to the lead and held it when a caution appeared on lap nine. As the field was approaching for a restart, March feature winner Paul Seburn saw an opportunity and slipped by for the lead. Dyal renewed his challenge and made his way back to the front on lap 12 to cruise home a winner. Seburn won the heat race.

The Mod Lites saw a first-time winner in Mason Ford, who held back 2019 track champion Austin Martin throughout the entire race. Martin was able to pass Ford at the line on a couple of occasions, but could not seal the deal. The duo would trade the high and low lines at the end with Ford coming out on top and giving Martin his second runner-up finish of the year. Martin and Alex Cline opened the night with heat wins.

A field of 27 Gladiators set up four heat races with Bailey Purcell, Patrick Tabb, Kyle Bowman and defending class champion Logan Casteel coming home winners. A field of 25 cars answered the call for the 15-lap main that saw Tabb jump out front and never give up the lead.