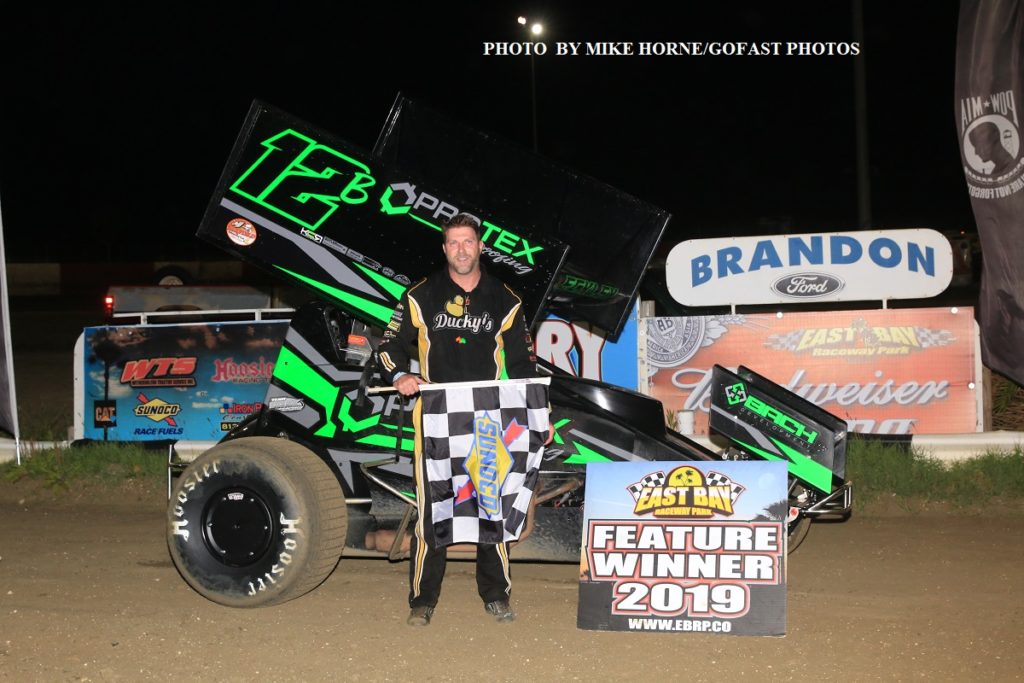 A features-only, 10-class racing program offered the perfect start to the month of May at East Bay Raceway Park. A good crowd turned out to see what the local drivers had in store and saw top talent rise to the top.

Classes that featured a higher car count were given additional laps in feature presentations, so six divisions saw their 15-lap main grow to a 20-lapper. The remaining classes stayed at 15 laps, except for the Pro Late Models, which was planned for 30 laps.

In that Pro Late Model main, Keith Nosbisch moved past leader Phillip Cobb in the late stages to secure his fourth win of the season. Cobb maintained a torrid pace at the head of the field, forcing Nosbisch to look to the high line for his pass. Nosbisch had to fight off the challenges of Travis Varnadore before moving in on Cobb.

Dale Kelley returned to Victory Lane in the 20-lap Gagel’s Modified feature. Kelley, who experienced a rough week in the Brandon Ford 40 a week ago, was able to maintain a steady line and was never challenged as positions within the top five were changing often. Travis Varnadore finished second in his second start of the regular season.

Bryan Eckley ran wire-to-wire to claim the win in the Q Auto & Injury Attorneys Sprint 20-lapper. The race was marred by a turn crash that saw the 3K of Guy Bos get vertical after contact with the wall. Bos walked away from the crash, but no one was able to catch Eckley through the remainder of the contest.

Forrest Gough inherited the Late Model Sportsman win after believed winner Raymond Folwell’s car was found to be without a muffler and in violation of the rules. For Gough, the 2018 division champion, the victory marked the fourth main of the year.

Robby Hoffmann rolled to his fifth straight feature victory in the Mini Sprint class. Hoffman grabbed the lead on lap 3 and moved out front in the 20-lap main. Behind him, Zack Amundsen and Jamie Tinkham provided an entertaining battle for the runner-up position, eventually claimed by Amundsen.

Austin Martin backed up an April win with a convincing run in the Mod Lites. Martin started on the outside of the sixth row, but wasted little time getting into the mix at the front of the field. Once he had asserted himself in the position, Martin was able to keep the spot through numerous restarts. The best effort came from James McGroarty, who moved low on Martin, but it proved to be too low as the car struck a tire barrier and lost a wheel.

Timmy Gay returned to Victory Lane in the 15-lap Street Stock main, Gay had built up a half-track lead by lap 5. When the race was ended, only three cars were on the lead lap and Gay was parked in the winner’s circle for the third time this year.

Nick Brown shook the monkey from back in convincing fashion, claiming the 15-lap V-8 Warrior main. Brown found something to his liking on the outside line, choosing to go there from his third row starting position. His objective was to hunt down race leader George Handy and once that mission was accomplished, he was unstoppable.

A new face in Victory Lane came in the Studio Red Gladiators when Tracy Lee Maynard rallied to claim the victory. Maynard, in his second East Bay start, started on the pole and led the early laps before yielding the top spot to Robert Kissam. Daniel Bowman got by and appeared headed to stretch the lead, but faltered on a restart. Maynard was sent to the tail for contact with Kissam, causing a caution. Kyle Bowman got into the mix, only to suffer a flat right front tire. Steadily, Maynard got back into the top five and then slipped past Bowman to take the lead, racing the final laps with the field in hot pursuit.

Defending division champion Brandon Yates made a triumphant return to Victory Lane, claiming his second Outlaw 4 win of the season. Vernon Hart ran a steady race to stay in the top three and claim his best finish with a second place run.