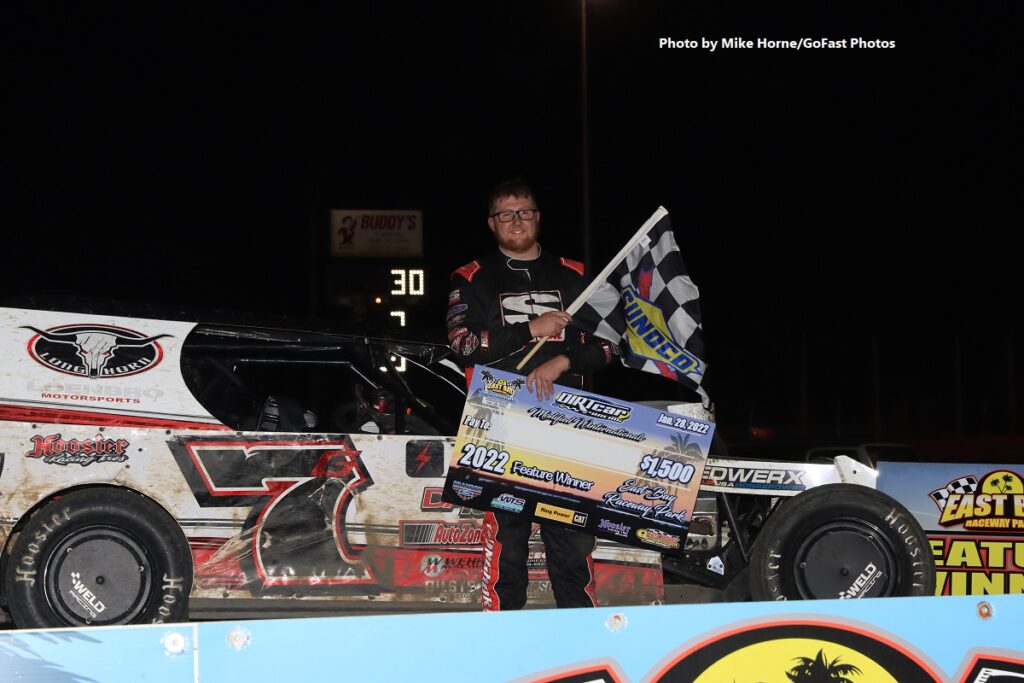 The third night of the DIRTCar UMP Modified portion of the 2022 Winternationals resulted in the third winner of the week while the Top Gun Sprints saw a repeat winner in the 25-lap main.

With the Modified drivers getting a last opportunity to secure valuable points for Saturday’s main event, there was plenty on the line for the night’s competition. Tyler Nicely set the pace with the fast time for the second time of the week, but this time he drew a “2” for the inversion, moving the fast timer of each group to the outside front row. Heat winners were Jeremy Rayburn, Brian Shaw, Nicely, Brian Skaggs, Seth Geary and Shane Burrows. The 12-lap B mains went to Drake Troutman, Pat Hoffman and Chris Wilson.

Nicely took the early lead from the pole at the start of the 30-lap feature event, keeping his car on the bottom and forcing challengers to the middle and higher. Trouble struck early as a Travis Varnadore spin collected Kevin Adams on lap 3. On the restart, Nicely had to fend off the challenges of Brian Shaw, who grabbed the lead briefly before Nicely got back in front. Shaw’s persistence resulted in a lead change on lap 11. His time in front would be short as Seth Geary took control on lap 13. Through several restarts, Geary was undaunted as Nicely began to pester the local racer. Geary cruised to the win, backing up his March 2021 regular season victory. Geary revealed the work commitments kept him home for the first two nights, but the Friday win was very special, considering the level of competition.

Throughout the week, drivers had been accumulating points to determine Saturday racing fields. The top six in points were locked in to the 75-lap, $5,000-to-win main event while the remainder of the field will go through heats and consolations to determine the starting field. The top six through three nights were Lucas Lee, Victor Lee, Chris Wilson, Drake Troutman, Bryan Bernhardt and Kevin Adams.

A field of 28 cars were on hand for the second night of the 2022 Top Gun Sprints season opener. The opening events were won by Billy Bridges, Shane Kreidler, Tyler Clem and Joe Zuczek. Four cars advanced from the B main to round out the field, led by Ohio’s Justin Clark.

At the start of the 25-lap main, the red flag flew before the first lap was completed. Brandon Grubaugh moved outside, but ended up in the wall and the car toppled. Grubaugh was unhurt but done for the night. Frank Beck took the early lead, but Garrett Green drove to the point on the second lap. As Green darted into lapped traffic, he had Thursday winner Danny Martin Jr. closing the gap. On lap six, Martin slipped to the inside to take the lead. Shane Butler mounted his own charge, making his way past Green for second on lap 17, but Martin was not to be denied.

The final night action is set for Saturday to complete week three of the 2022 Winternationals.