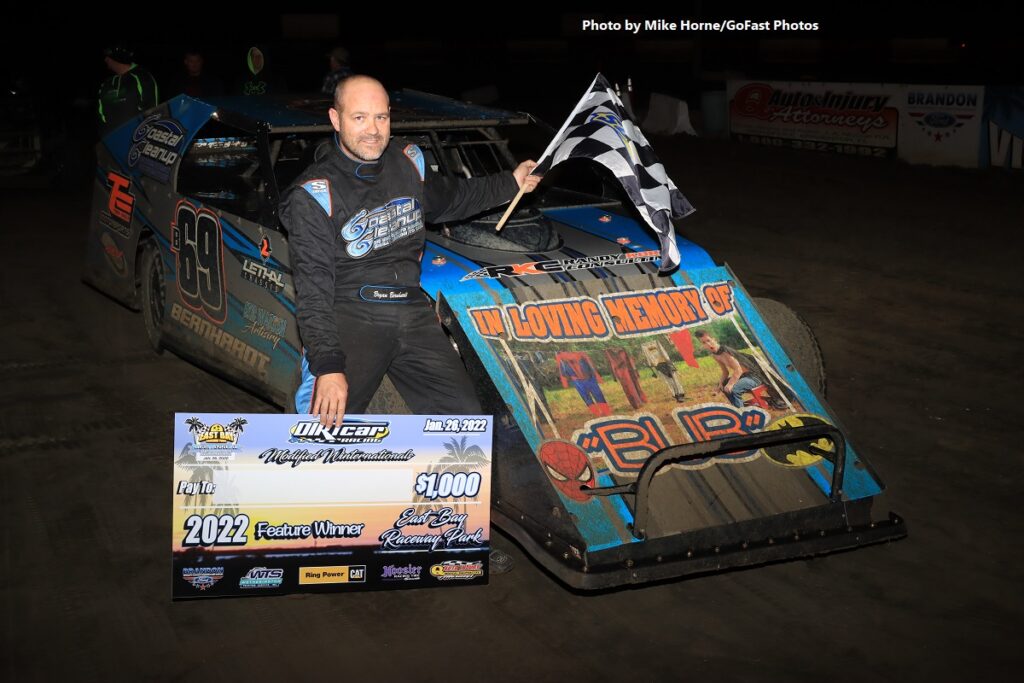 After a Tuesday rainout, the DIRTCar UMP Modified portion of the 46th annual Winternationals got started on Wednesday with a field of 60 cars opening the program, representing 15 states.

Kentucky’s Tyler Nicely posted the fastest qualifying time of the night with a 16.964 and drew a “1” to create a straight-up start for the heats. Winners of the preliminaries were Dale Kelley, Nicely, Chris Wilson, Lucas Lee, Chase Allen and Drake Troutman.

The top three finishers in each heat advanced to the 25-lap feature, sending the rest to one of three 12-lap B mains. The B features were won by Shane Burrows, Tyler Clem and Kevin Adams.

Heat winner Chase Allen forfeited his sixth starting spot after an issue with his car, taking over Zachary Hawk’s ride for the feature and moving to the rear. At the start, Nicely pulled out to a solid advantage, but trouble struck early. As Nicely came roaring into the fourth turn on the third lap, the car spun and the field took evasive action. The action continued hot and heavy at the front as Chris Wilson took over the top spot. Wilson had to hold off the challenges of Lucas Lee and Dale Kelley with Bryan Bernhardt coming from the fourth row to challenge. As the field hit the halfway mark, Kelley lost the handle and spun to the inside. That opened the door for Bernhardt to move to second. It didn’t take long for the 2021 track champion to move to the front as Wilson bobbled in the second turn and Bernhardt was out front. On several subsequent restarts, Bernhardt was able to pull out, leaving Wilson and Lee to spar for position. A lap 22 caution for Shane Burrows slowed the field for the final time, but no one could catch the eventual winner.

Drivers began accumulating points for the events that will allow the top six after Friday to be locked in for the Saturday 75-lap $5,000-to-win finale.