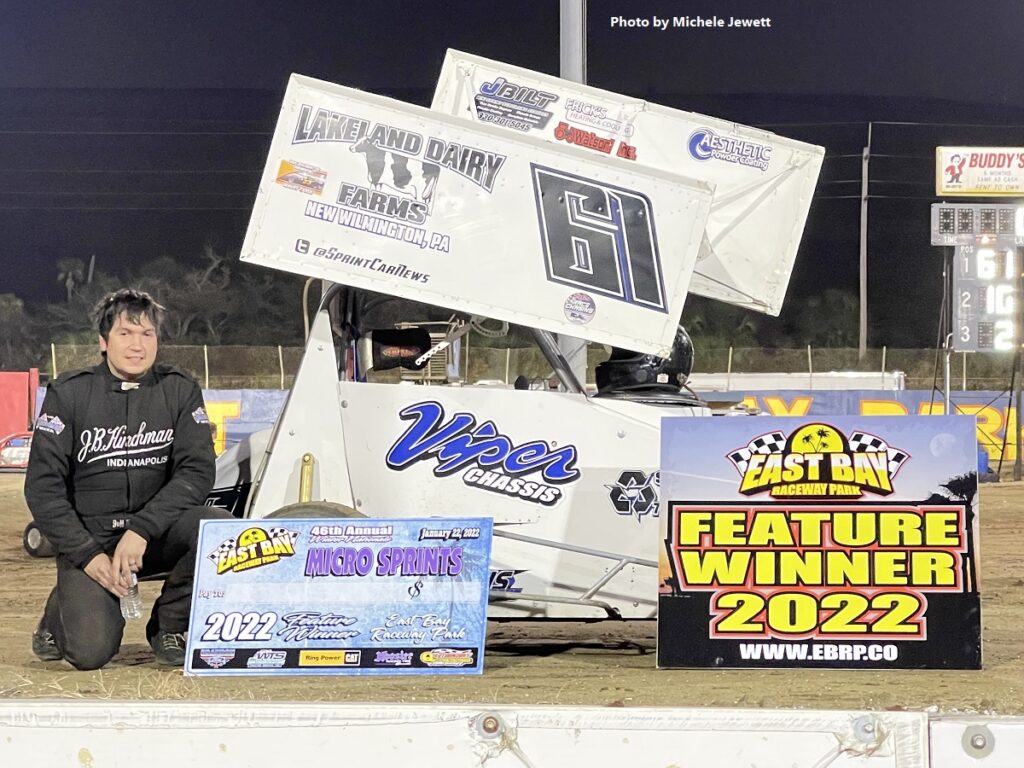 The third and final event of the first week of the 46th annual Winternational brought afternoon drizzle and cooler temperatures, but the hearty race fans were treated to exciting on-track action. Three new winners were parked in Victory Lane throughout the night with nearly 90 cars in the pit area.

The top six in each division were established by Thursday and Friday points and the elite were exempted from the heat races. They would draw their starting spots after an intermission hot lap session to determine how they would come to the green.

Bill Gise won the lone Mini Sprint heat, setting up the 17-car main. Chris Diamond led the field to the green and held the top spot for the first two corners. Two-time feature winner Bryce Comer came from fourth to gain the lead by the end of the first lap. The race was red flagged when contact was made with a stopped Dennis Sanchez, causing the car to flip. Sanchez was unhurt. When the green returned, Bryce Comer looked well on his way to dominating until trouble struck. As the leader approached a lapped car, the car spun, leaving Comer nowhere to go. The contact sent Comer into a series of flips. The driver was able to walk away from the crash and 2021 track champion Bruce Comer assumed the lead position. On lap 11, Comer and Gise made contact with the resulting incident sending both to the tail just past the halfway mark of the 20-lap feature. Brad Sutton became the fourth leader but his time was short as Ty Nevins scooted past his Hyper Chassis teammate to take the lead. As Nevins settling in, Gise and Comer were charging from the rear. Come moved into second on lap 16 and took the lead from Nevins a lap later. His drive earned him the win in the division’s finale.

A field of 13 were on track for the 20-lap V-8 Warrior/Thunderstock main. Greg Crowe inherited the seventh start spot after winning the heat in his only appearance of the week. At the green, polesitter Mark Roadarmel Jr. had to hold on as Friday Winner Cody Allen was charging on the outside. Allen gained the top spot and worked through the bottom of the race track on his march to his second win.

Matt Haefke and Friday feature winner Nick Skias were the best in heat races for the Micro Sprints as a 19-car field would present itself for Derek Powell’s green flag. Polesitter Glenn Macomber had a brief lead until a determined Jeff Haefke Jr. took over. Haefke set a torrid pace early with Wes Libert running second. A tire issue chased Libert from contention, moving Skias into the best position. Attrition began to become a big factor as several cars dropped out of the contest. Haefke managed to build up a lead after each restart and hustled his car to the finish line in front of a determined group of competitors.

It was a clean sweep for the Gladiators as Robert Kissam jumped from the outside pole to take the lead. The race was caution-free until debris on the back straightaway brought out the yellow on lap 19. In the last lap shootout, Kissam held off Jeff Lacey and posted his third win in as many races. The previous gladiator heat saw Troy Dittebrand with a repeat preliminary win.

The final feature of the night was a 30-lap main for the Street Stocks. Polesitter Scotty Kay Jr. brought a car that hadn’t run in nearly a year and dialed in his program to dominate the feature on the final night. Austin Sanders and Tommy Hill were winners in the heats.

The 46th annual Winternationals will resume on Tuesday, January 25 with UMP/East Bay Modifieds kicking off five nights of action. The Mods will be joined by the Top Gun Sprints for three nights of racing beginning on Thursday.