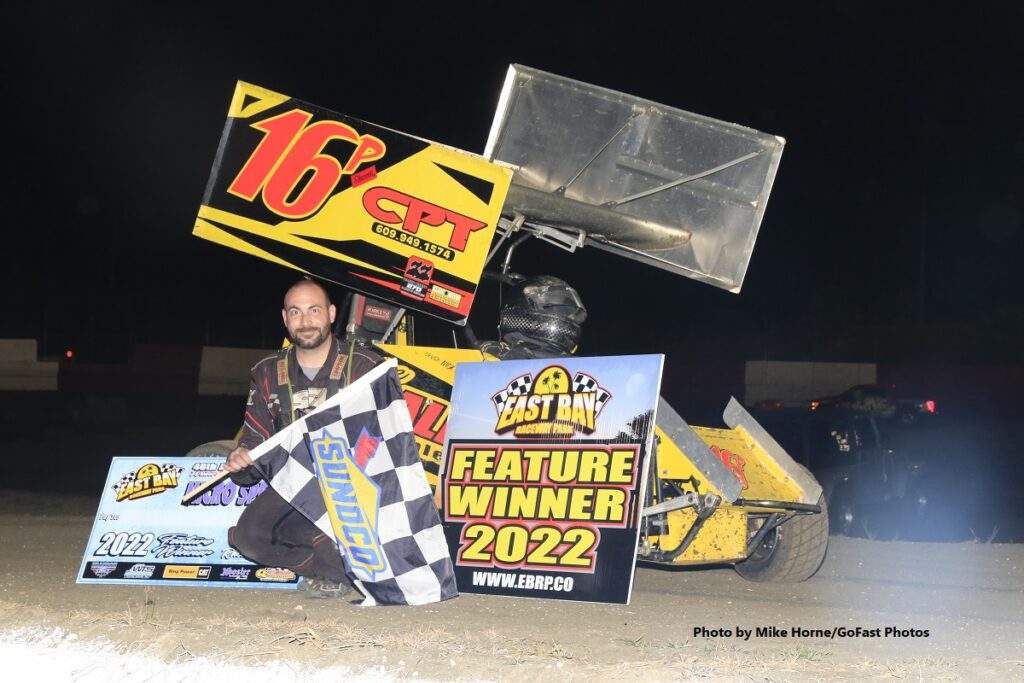 The second night of the 2022 Winternationals gave the competitors a chance to utilize what they had learned from the Thursday night opener. In many cases, the lessons were taken to heart, setting the stage for an exciting end of week one with Saturday’s features on tap.

Points were tallied for the first two nights and the top six drivers in each class will be locked into the Saturday feature without having to run a heat race. For some, the work of Thursday was countered by the misfortune of Friday.

For a brief moment, 2021 East Bay track champion Bruce Comer enjoyed the lead in the 15-lap Mini Sprint feature. The thrill didn’t last as Thursday winner, Bruce’s nephew Bryce, shot into the lead and never gave up the top spot. With the back-to-back feature wins coupled with a pair of heat races, Bryce Comer remains undefeated going into the final night of action. Doug Dyal opened the night with a preliminary win.

South Florida pavement racer Cody Allen learned some valuable dirt lessons from Thursday’s winner Tommy Hill, following along in Hill’s tire tracks through the early stages of the 15-lap main. Hill’s misfortune, coupled with Allen’s commitment to maintaining his line, allowed to take the lead on lap 6 and hold off the field for the remainder of the race. The division’s heat was won by Hill.

Pennsylvania racers dominated the heat races for the Micro Sprints with Nick Skias, Ryan McAndrew and Corey Schmuck Jr. prevailing in the 6-lappers. McAndrew was the early leader, looking to improve upon his Thursday night runner-up finish. Skias, who endured rough night on Thursday, saw his fortunes turn as he drove a strong running race car around McAndrew for the top spot. The rest of the race would not be a cruise as Skias found himself holding off Ohio’s Jeff Haefke Jr., who gained quickly to the end. Time ran out for Haefke as Skias came home with the win. The winning effort was not enough to offset Thursday’s performance as Skias ended up eighth in the points, led by McAndrew.

A pair of 11-car heat races were witnessed in the Gladiator class, won by Troy “Socks” Dittebrand and Patrick Tabb. Dittebrand would establish himself in the front after bypassing Wayne Kissam and Raymond Rogers Jr. Thursday winner Robert Kissam started 11th in the 21-car heat, but had moved to second by the late stages. Kissam could close, but could not pass as Dittebrand took the checkered flag in front. The trip;le deuce failed tech inspection, handing Kissam his second straight win.

The Street Stock main offered wall-to-wall action. Thursday runner-up Tim Powers was on the early point, pestered by fellow Okeechobee racer Scotty Kay Jr. Throughout the racer, there was plenty of side-by-side racing action. Near the midpoint of the race, Powers and Kay were battling when 2021 East Bay track champion Rich Livernois shot past both to grab the lead. From there, everyone else was racing for second as Livernois repeated his 2021 Winternationals win with another stop in Victory Lane.

For the final night of racing action, features will be extended. Classes that had 15-lap mains this week will be racing 20 laps while Street Stocks will see 30 laps.