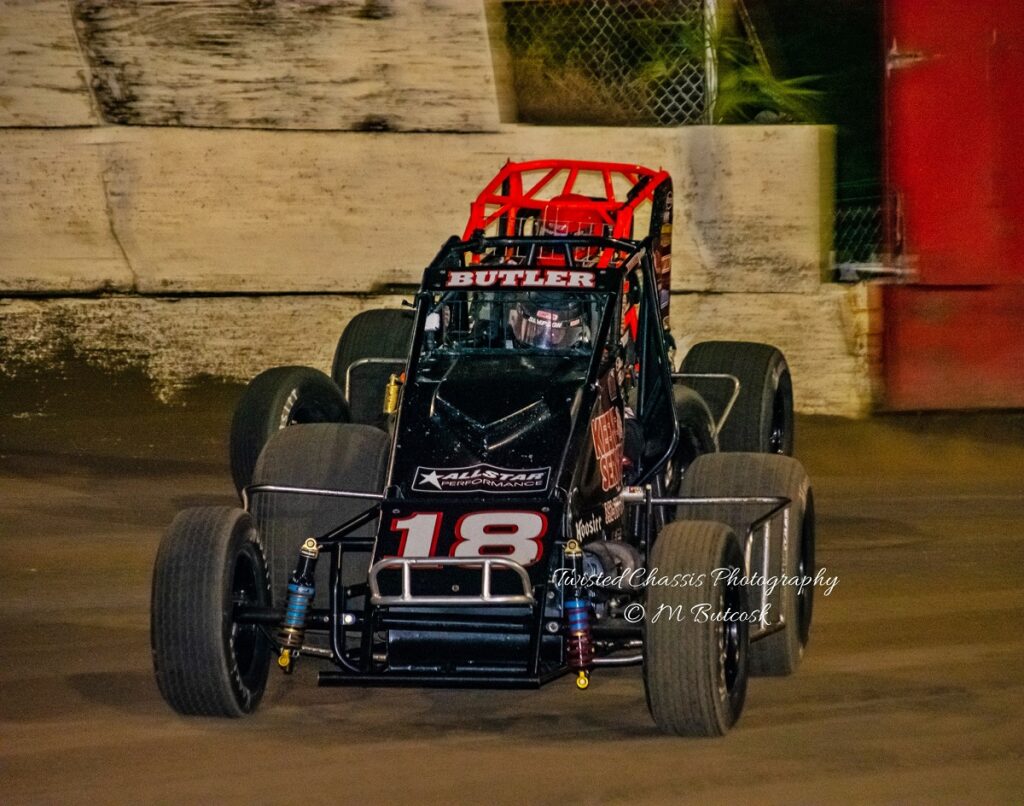 For five divisions, the Saturday night racing program at East Bay Raceway Park marked the end of a long season of action.

The final 2021 visit of the Top Gun Sprint series was the annual running of the Don Rehm Classic, featuring non-wing sprints. A field of 20 cars were on hand to vie for the prestigious honor, including former winners Shane Butler and A.J. Maddox. Tyler Clem held the top spot in the season point standings, but the championship was still undecided until feature time.

Butler grabbed the early lead and racing into lapped traffic by turn four before the first caution flew for Bryan Eckley. On the restart, the field was able to complete one lap before Justin Webster and heat winner Maddox tangled while racing for second. Both cars were eliminated. Clem, who had won his heat and stood to add $300 for the Clean Sweep with a feature win, jumped to second. The race was stopped on lap 11 for a stalled Sheldon Kinser Jr. Three laps after the restart, Steve Muller slammed into the turn one wall, bringing out the red flag. Muller was not hurt in the scary crash. The best battle was taking shape for third between heat winner Brandon Grubaugh and Kyle Connery with Connery gaining the advantage for one lap before Grubaugh re-asserted himself in third. The move came just in time as the red flag flew again for a Troy Thompson rollover on lap 20. With just five laps remaining, Clem closed on the leader, but Butler was able to scoot ahead from contenders. The checkered flag flew and the winner of the 2019 don Rehm Classic had another trophy to his collection.

A close race in the Q Auto & Injury Medical Malpractice Attorneys Micro Sprints got even closer as the top two contenders eventually swapped spot as Chris Kennedy claimed his third feature win of the season. Point leader Doug Dyal carried a 16-point advantage in the night, but finished well back in his heat. This gave William Burnside an opportunity to gain ground. Burnside picked up four points to narrow the gap to 11 before the main. Bad luck continued to plague Dyal, who dropped out of the contest early on. Burnside’s second place finish behind Kennedy earned him the unofficial track title by three points, subject to a points audit. Burnside and Jerod Meyers won their heats.

Brandon Yates claimed the point championship, but John Wayne Haynes won the feature in 602 Late Models. Yates, a former Outlaw 4 champion, chased Haynes to the finish after winning the heat.

The Street Stock title had already been clinched by Rich Livernois and the evening’s field contained no former winners in 2021, an opportunity for someone to get the cherished spot. Josh Jones and Jimmy Baker won their heat races and it would be Jones who would double down for his first feature win. Jones had to hold off top drivers, running a masterful line throughout to make passing impossible.

Charles Paris Jr. led the Gladiators in 2021 feature wins and that gave him enough to claim the 2021 title by just starting the 15-lap main. Paris did more than start the race, locking into battle with David Zeman for second, settling for third and the point crown. The race winner was a first time victor as Josh Genarie drove a determined race to bring home the victory. Genarie had raced last week for the first time early August, using the hiatus to get the race car into top condition. The win served as a fitting reward for the effort in the year.

Racing action continues Saturday, Dec. 18 with the final event of 2021 season offering 604 Late Models in a 50-lap topless event as well as Outlaw 4s, V-8 Warriors, Q Mini Sprints, Mod Lites and Florida Old Time Modifieds. Santa is expected to take a break to greet the kids and drivers will be passing out candy. C & W Racing will be providing a pair of bicycles to be given away, as well as prizes for adults that include a pair of tickets to the Feb. 12 Lucas Oil Dirt Late Model Series finale. Special event pricing is in effect.