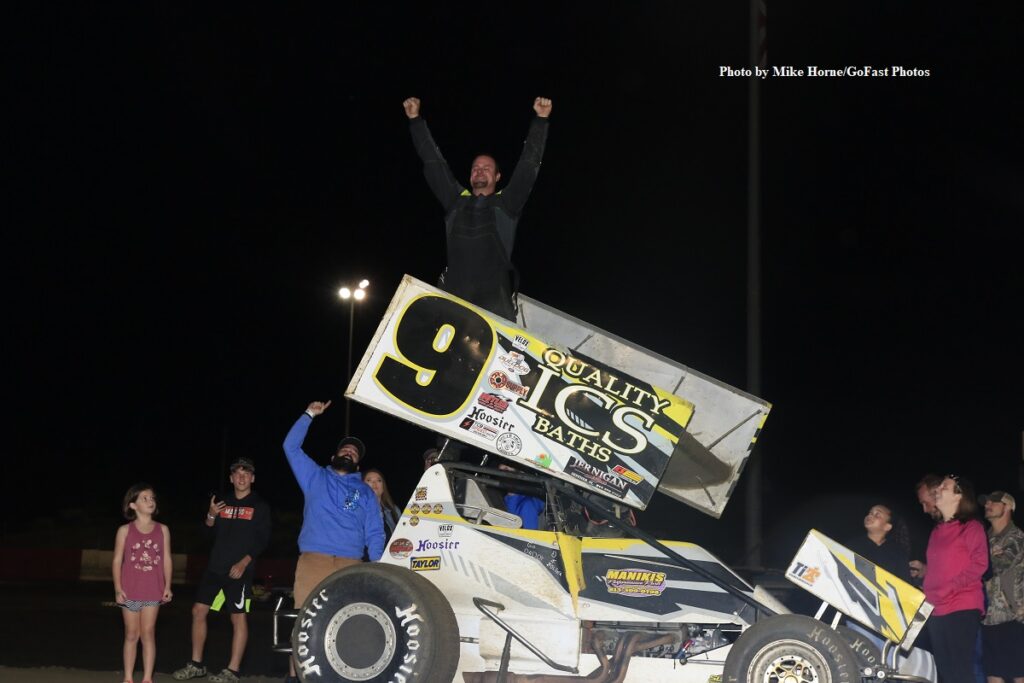 A busy night with seven classes brought exciting action as East Bay Raceway Park returned to action as the 2021 season starts winding down.

The night saw the final round of competition in the Q Auto & Injury Medical Malpractice Attorneys Sprints for 2021. Two-time feature winner Frank Beck held a 40-point lead and needed to finish in front of Tim George to clinch the title. When the green flag came out for the heat, George coasted to a stop in turn one, unable to compete, which gave the championship to Beck.

In the 15-lap feature, a determined Steve Diamond took the lead on lap three and made the best of it, despite the late race challenge by Beck. Diamond, the 2020 track champion, was racing with a heavy heart after the death of a family member earlier in the week. In an emotional Victory Lane, Diamond thanked everyone for their support of the racing program and through the difficult times.

The race was marred by a Billy Bridges flip in the early laps. Bridges was unhurt and able to walk away from the crash. Bridges and Andrew Griffin won their heat races.

In the Gagel’s Modified main, eventual winner Austin Sanders and runner-up Bryan Bernhardt treated the fans to one of the best displays of clean side-by-side racing that had been seen in a long time. Sanders, who admitted in Victory Lane that he had no brakes, never held more than a length lead over Bernhardt throughout the contest. Travis Varnadore was best in the heat race.

Rich Livernois Jr. rolled to his sixth victory of the season in Street Stock action, locking up the 2021 points title in the process. Livernois found himself in command of a responsive car that drove exactly as expected throughout the contest. The best challenge came from Jimmy Baker, who had to go to the pits on a lap two incident but roared back to move into second by the halfway mark. Baker gave chase, but could not bypass the eventual winner. Baker and Kyle Bowman were heat winners.

John Wayne Haynes backed up his first career win from October 23 by scoring the victory in the 602 Late Model main. The crew made some changes between the heat and feature and found the winning combination. Brandon Yates topped the heat.

Chris Kennedy became a back-to-back winner in the Q Micro Sprints. Kennedy, who recorded the win on October 23 in only his second visit in the Micro Sprint, appeared to be relegated to second place when a mechanical issue forced race leader William Burnside from the top spot. Kennedy had slipped by Burnside at one point, only to lose the lead in the second corner on the next lap. Paul Seburn broke through for his first heat race win of the year.

The V-8 Warrior main event was rough for anyone who held a lead. Initial leader George Handy was only able to stay up front for a lap until his car stopped the track. Handy continued from the tail, but dropped out a few laps later. Heat winner Nick Brown inherited the lead with Jason Burnside, who won his preliminary, trailing. Michael Hart grabbed second, but got loose off turn two and slipped back to fourth. Hart quickly regained second, but Brown was building up a big lead. The leads were wiped out by cautions throughout the second half of the race. As Brown came to the white flag, his car showed smoke and the leader slowed, allowing Hart to drive by for the win.

Thomas Adams etched his name in the record books as a winner in 2021. Adams, who had finished second to Rodney Martin in the last meeting of the class, stayed at the front from start to finish. Wayne Kissam and Brittany Hart were heat winners.