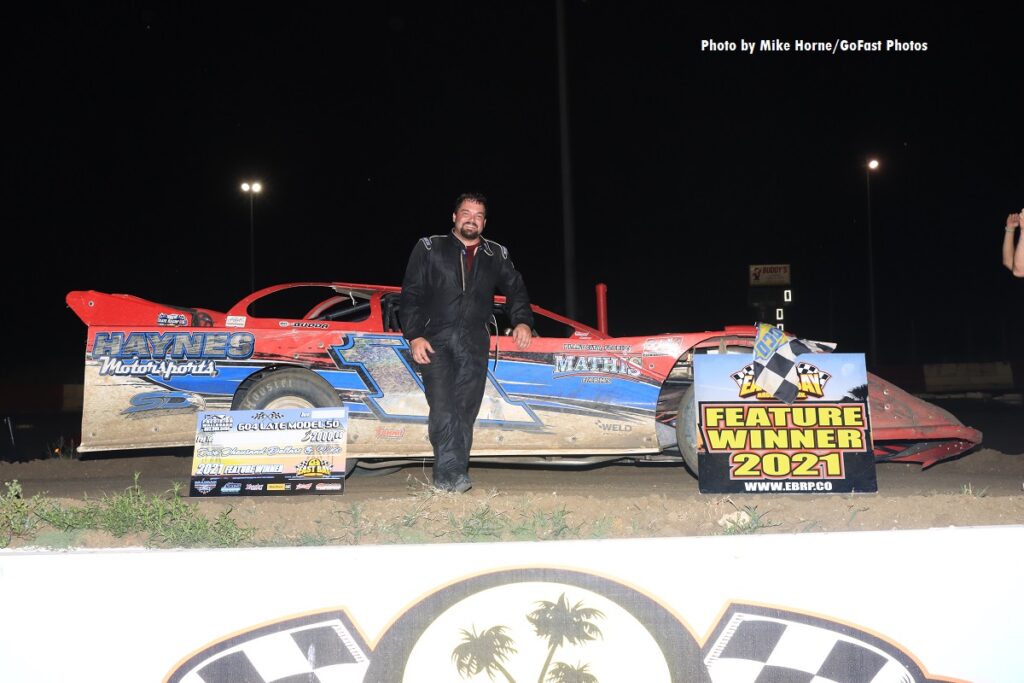 With the threat of rain looming, the Saturday racing action rolled without delay, offering fast-paced action in six divisions.

The 604 Late Model class came back with a vengeance as the Precision Wallboard 50 was on the schedule with a $2,000 payday awaiting the winner. Defending track champion Phillip Cobb grabbed the early lead from Daniel Woody, becoming the first driver to test the outside line. Cobb was able to power away, leaving a host of contenders battling for second, led by Keith Nosbisch. A lap 18 caution wiped pout Cobb’s large lead. On the restart, Jimmy Waldrop moved to second, bringing Waylon Haynes up to third. Cobb was again able to develop breathing room as the top three drivers were committed to the same line. Shortly after the halfway mark, the caution for a Haynes spin in turn. On the restart, Waldrop slipped by only to have Cobb regain the lead. It was a moot point as the caution returned before a lap was completed, charged to Wallace Peacock, who hit the backstretch wall while running fifth. The next restart saw the surging Travis Varnadore take the lead away on lap 34, but it would be short-lived. On the next lap, Nosbisch grabbed the lead. His time at the front was also brief as a new leader emerged in Waylon Haynes. After he was sent to the back, Haynes found determination and drive as he made his way back into position to move out later in the race. Varnadore mounted a last-ditch effort and came up short in a bid for the $2,000 top prize. Cobb and Josh Peacock claimed earlier heats.

The night’s program opened with the Gagel’s Open Wheel Modifieds with defending track champion Bryan Bernhardt finally getting his first win of the regular season. Bernhardt, who won the March 6 Modified event as part of the World of Outlaws program, seized the lead from Austin Sanders on two occasions early, but each was nullified by caution flags. Bernhardt was able to seal the deal on lap eight and head off to Victory Lane. Bernhardt and Tyler Clem were best in heat races.

Doug Dyal recorded his first Q Auto & Injury Medical Malpractice Mini Sprint main of the 2021 season after coming close on several occasions. Bryce Comer held the early lead with Dyal in close pursuit. Bruce Comer made it a three-car battle, eventually taking the high line to the front. Dyal patiently pursued Comer and finally saw an opportunity to grab the lead and move on for the win. The race was red flagged on lap five when David Hall flipped in turn four, landing atop Charles Landis’ ride. The drivers were uninjured and continued in the race. Dyal and Bruce Comer were heat winners.

Two-time and defending track champion Austin notched his third feature win in the Mod Lites. To get the win, Martin made a nice move in turn one to dispatch leader Alex Cline. From that point, Martin stayed true to the low side and brought home the victory, backing up an earlier heat win. Jeff Bonnema recorded his first heat win of the season.

Jason Burnside became a first-time winner in the V-8 Warriors, holding off Nick Brown through the late stages. Burnside remarked in Victory Lane how he had run second many times, including five in a row and it felt good to again be the feature winner. Brown did score the heat win.

A field of 17 Gladiators were on hand. Daniel Bowman had the early lead in the 15-lap feature, keeping the bottom line through the race. Bowman had a variety of challengers, but the best drive was coming from Charles Paris Jr., who had been relegated to the rear due to his win last time the Gladiators competed. Paris was able to come through the field and camp behind Bowman, making contact with the leader in turn four. The two managed to stay in front and soon, it was Paris driving by for the win. Derrick Edwards scored a heat race win and a top-five in the feature. Robert Kissam added a heat win.