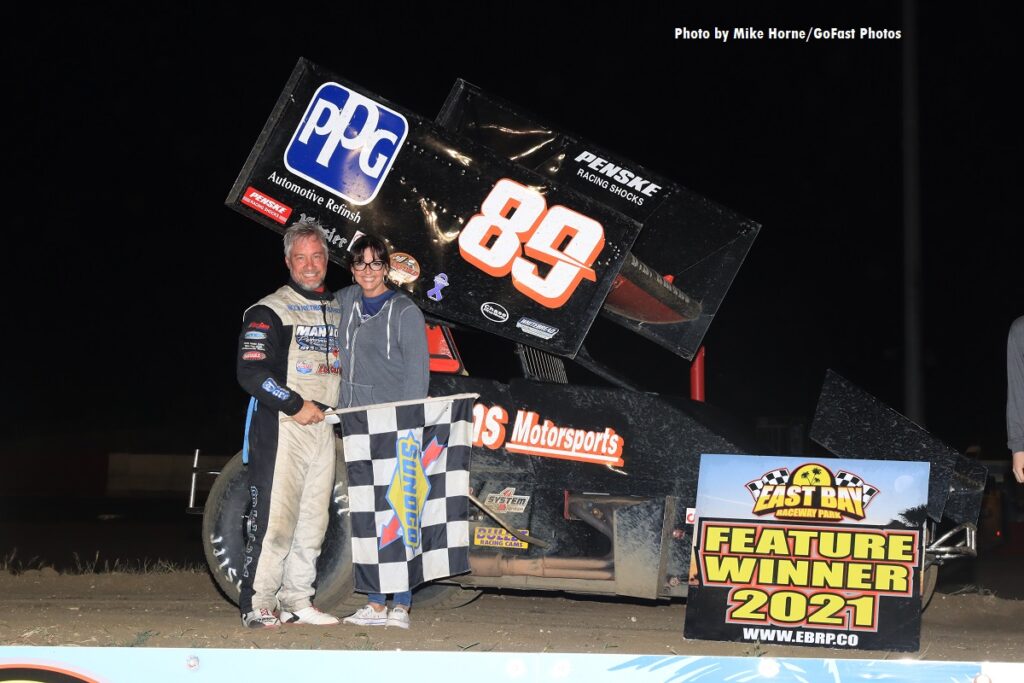 Five drivers were able to make a return visit to Victory Lane Saturday night as East Bay Raceway Park wrapped up the action for the month of May.

Kenny Brewer opened the night’s action by posting a victory in his first appearance of the 2021 season in the Q Auto & Injury Medical Malpractice Attorneys Mini Sprints. Brewer swept around early race leader Doug Dyal to take command and move out to the win. Heat race winners Bruce Comer and his nephew, Bryce Comer, experienced mechanical difficulty in their bid to sweep the events. The issues for Bruce Comer stopped a win streak that had extended back to November 2020. The second heat race was red flagged when Josh Davis climbed the backstretch wall and flipped. He was treated and released and able to compete in the feature.

Nick Brown started the 15-lap V-8 Warrior main event in the back, but it was more about where you finish than where you start. Brown had moved into the top three before the halfway mark, making his pass on leader George Handy en route to his third win of the season. Brown and Jason Burnside had won the earlier heats.

Frank Beck prevailed in the battle to become the first two-time winner in the class. Beck, who won the season opener, gingerly worked through lapped traffic. Behind him, Garrett Green had to stave off the constant efforts of Joe Zuczek and Steve Diamond, but Green prevailed to add a second place run to his feature win earlier in the year. Zuczek and Bryan Eckley won the 6-lap heats.

Rich Livernois powered to victory, but not without a hard challenge from Jerry Bruce from the mid-point of the race. Bruce was able to pull alongside Livernois on occasion, but each effort was wiped out by a caution. Zack Amundsen and Tim Gay scored heat wins.

Alex Cline inherited the lead after previous leader Darren Bass was caught up in a spin by a car about to be lapped. Cline made the best of his good fortune by staying on the bottom of the track to prevail over heat race winner Bo Bass. Darren Bass claimed the other preliminary.

The final feature of the night saw Charles Paris Jr. return to victory in the Gladiator main. Alyssa Grant led the early stages and managed to keep Paris and Wayne Kissam behind her through the early going. Once Paris was able to slip by, he kept a steady pace through the field as Kissam attempted to close in. Paris backed up his earlier heat win. The division’s other heat was claimed by David Zeman, who notched his first East Bay win.

As the calendar changes to June, the action rolls along with the Precision Wallboard 50 for 604 Late Models taking place on Saturday, June 5, paying $2,000 to the winner. Joining the Late Models will be the Gagel’s Modifieds, V-8 Warriors, Mod Lites, Q Mini Sprints and Gladiators. Special event pricing is in effect.