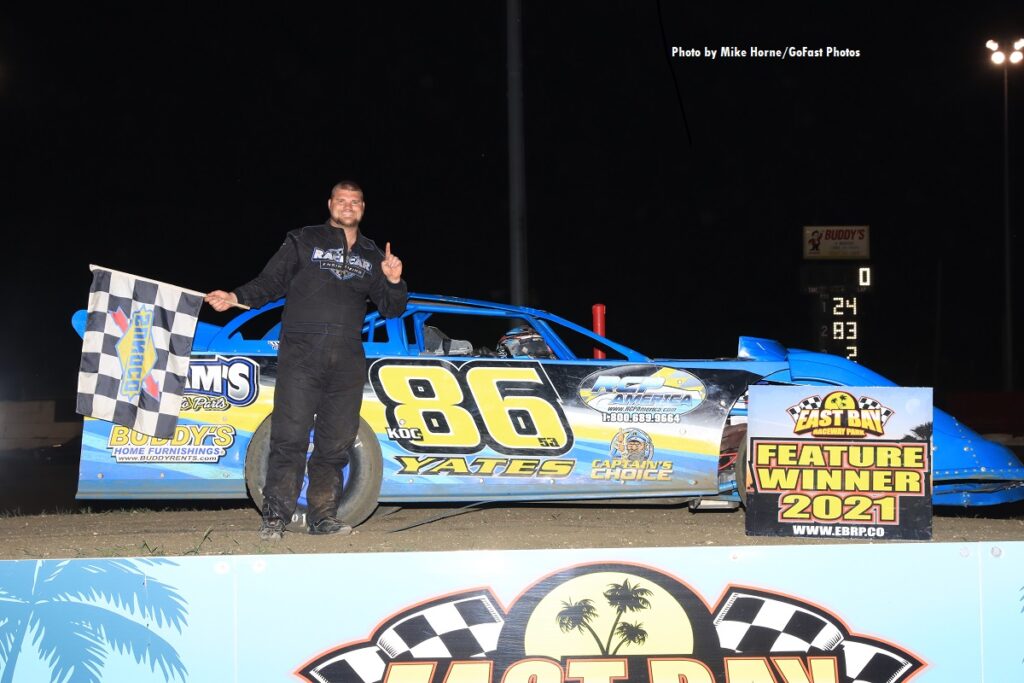 The third night of the 2021 season saw two divisions make their first appearance with four classes getting a second shot in the road to the season championship.

Brandon Yates, a former Outlaw 4 track champion, posted a second place run in his first appearance in the 602 Limited Late Models two weeks earlier and tonight did it one better by winning the 15-lap main after taking the heat win. With the win, Yates moved into the top spot in the division point standings.

A photo finish in the V-8 Warrior main topped the thrills on the night as Nick Brown edged Jason Burnside on the final lap. Burnside had led the bulk of the race, holding off challenges of Juston Meeks until Meeks spun just past the halfway mark. That moved Brown to second and a new challenge emerged. Brown was able to slip by on the bottom, but the appearance of a caution flag for a Cody Mezyk spin negated the pass. With few laps remaining, Brown had to quickly renew the challenge, grabbing the lead at the line to complete lap 13. The lead was short-lived as Burnside edged back out front under Derek Powell’s white flag. Brown again went to the bottom down the backstretch and appeared to have the advantage, but a last effort by Burnside nearly changed the outcome. Heat winners were Meeks and Gary Lucas.

The first Street Stock point race of the year saw the same winner in Victory Lane as the opening night of 2020. Rich Livernois Jr. was able to keep a hard-charging Zack Amundsen at bay, keeping the winning line down low. Amundsen and Michael Cherry were heat winners.

William Burnside was the early leader of the Q Micro Sprint 15-lap main. Doug Dyal, who won the feature two weeks previous, slipped past Paul Seburn for second and began to pursue Burnside, who had built up a lead. Dyal was able to catch the lead and move inside on lap 9, but a Joshua Davis incident reset the field. It took Dyal three laps before he could mount a serious challenge, slipping by for the lead on the backstretch and rolling to his second consecutive main event. Dyal and Seburn had taken preliminaries.

The 4.6L Ford class got its start on the year as Jesse Brown of Clewiston doubled down with a heat win and the 15-lap main event. Brown expressed how much he loved coming to East Bay despite the three-hour tow and thanked his wife for convincing him he needed to race again.

The Gladiator main event brought Charles Paris back to Victory Lane. “I’ve never had a Bomber that raced as good as this one,” he said after his 15-lap main win. The feature saw 23 cars take the green with Paris, Patrick Tabb and Robert Kissam owners of heat race wins.

Racing action continues with special events on the schedule for 604 Pro Late Models and Gladiators among the action. The annual Donnie Tanner Memorial will have the Late Models going 50 laps for $2,000 to win. Gladiators will be racing for increased purses in the Mama Kathy Memorial, honoring the late benefactor of many teams who passed away in 2020 (Fans are encouraged to wear purple in support). There will be racing the Gagel’s Open Wheel Modifieds, Q Auto & Injury Medical Malpractice Attorneys Sprints, Mini Sprints and Street Stocks. The Easter Bunny will be on hand as drivers hand out candy to kids on the frontstretch at intermission.