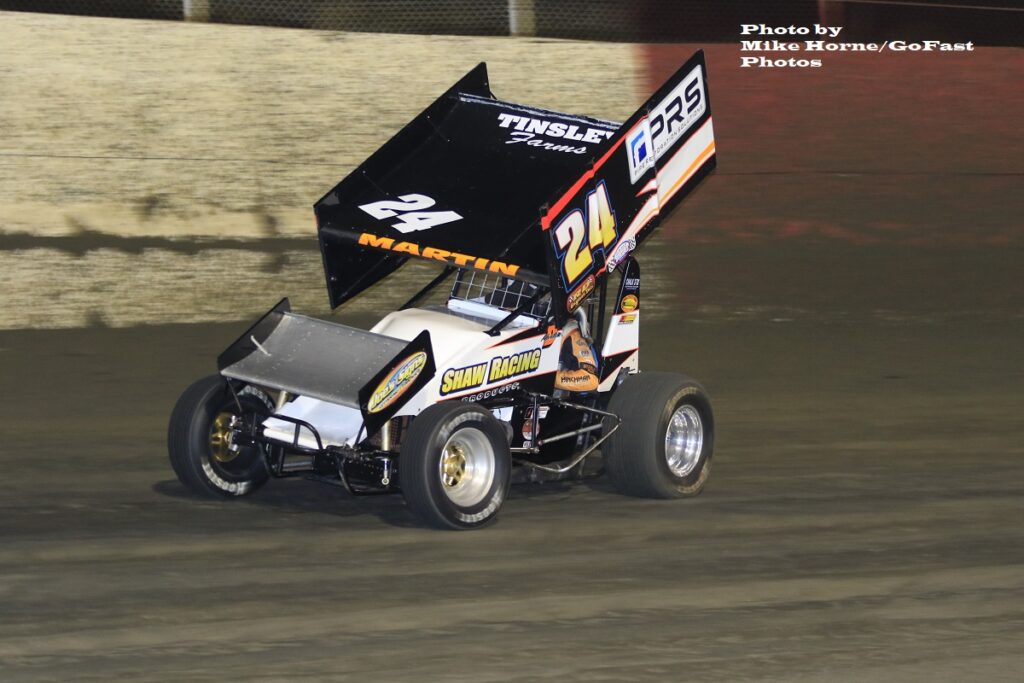 The opening night of week 4 of the 2021 Winternationals saw a field of 49 360 Sprints from 18 states as the competitors set the stage for the Saturday “King of the 360ds” with some exciting action.

Six heat races opened the program with the top 16 cars based on passing points earning an automatic bid into the A main. The races were won by Connor Leoffler, Terry Gray, Danny Martin Jr., Dale Howard, Ben Brown and Tyler Gunn. When the passing points were tallied, Brett Wright, who started eighth in his heat and finished second, would prevail and earn the pole position for the 25-lap A main.

Nine more spots were filled through a trio of B main events with Max Stambaugh, Cale Conley and Eric Riggins Jr. earning the top spots.

At the start of the 25-lap feature, Howard took the early lead from outside the front row. Wright held second while Martin was battling Terry McCarl for this in the early laps. The man of the move was Tim Shaffer, who started 14th, but sat in the top five after only four laps. The leaders hit lapped traffic on the fifth lap with Howard keeping the car on the low side to work through the backmarkers. This allowed Martin, who had bypassed Wright on lap five, to narrow the gap on the leader. By lap seven, Martin was able to sweep past and began to find racing room. Howard fell to Shaffer, who now set his sights on hunting down Martin. With both drivers using the same groove, catching was easier than passing and Shaffer couldn’t find a place to sweep by. Martin kept putting lapped cars between himself and Shaffer, playing a game of hide and seek among the cars going a lap down to the leaders. The caution showed on lap 21 for a stalled car in turn one shortly after Austin McCarl left the race in a hurry into the infield with heavy smoke from the engine compartment. The remaining laps saw no additional challenge as Martin was able to cruise out for a Winternationals win. He told the crowd that his team had opted out of a 360 race last week to run with the Top Gun series to get lap time at East Bay. Martin ran second in two Top Gun races, but became the man to beat with the 360 powerplants.

Night number two will be held on Friday with the point standings tallied at the end of the night to set lineups for the King of the 36os finale on Saturday.