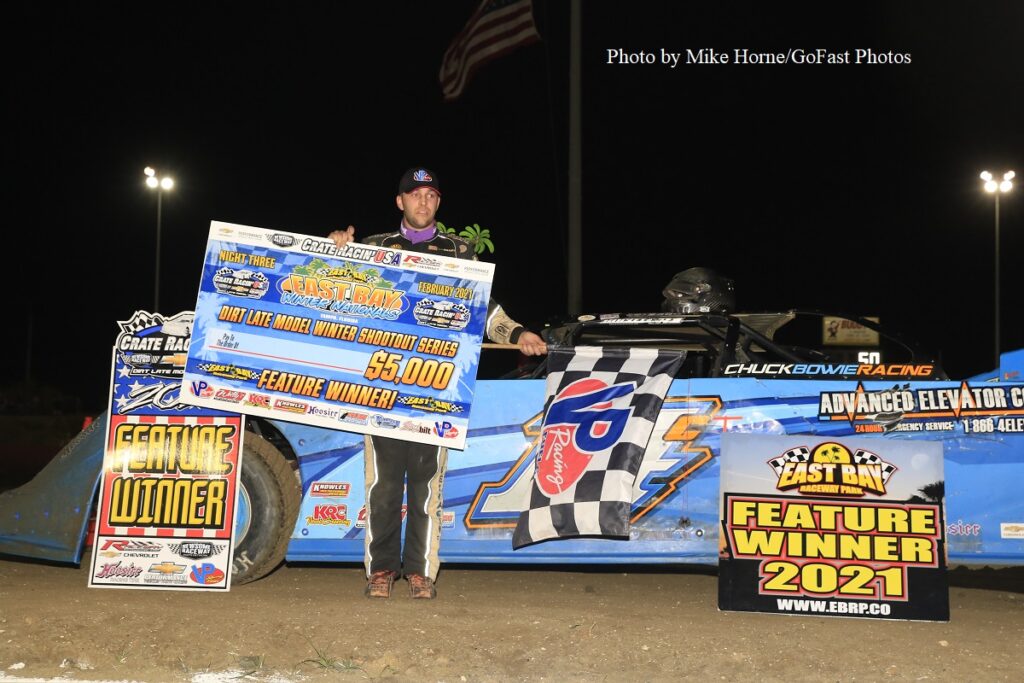 The final night of the third week of the 45th annual Winternationals came to pass after a brief afternoon shower cast a shadow of doubt on the whole proceedings. With most other Florida race tracks losing their events to Mother Nature, East Bay Raceway Park was able to run a complete event without delay.

The 2020 East Bay Raceway Park Pro Late Model track champion showed the visitors how it was done in qualifying, posting the fastest lap of the week as the only qualifier to drop below the 16 second mark. There would be six heats on the night with wins going to Braeden Dillinger, Travis Varnadore, Jason Welshan, Kyle Hardy, Cobb and Kyle Lukon. The three B-mains were won by Shan Smith, Cory Hedgecock and Jeremy Shaw.

A field of 26 cars would have a tough act to follow after the Friday 30-lap event went caution free. In reality, this night’s main proved even better as the field completed 32 circuits before the first yellow flew.

Travis Varnadore was the early race leader until Cobb blasted by for the top spot on lap 4. Lukon moved to second two laps later, bringing Hardy to third. Meanwhile, two-time feature winner Mark Whiutener, who had started in the fifth row, had worked forward to move into the top five by the ninth lap. The leader had entered lapped traffic on lap seven and Cobb was having little trouble bypassing backmarker. Hardy took second on lap 12 and began to chase down the leader. As the duo approached the flagstand, Hardy was in front by .009 seconds, the race’s third leader. As the race stayed green, Whitener would begin to pester Cobb, finally slipping through on lap 26.

The first yellow on lap 32 for a Jake Knowles incident left 24 cars still in contention and the second yellow showed up two laps later for a Keith Nosbisch issue and another caution showed on lap 36. In just a few laps, the race for the lead would again intensify. Whitener was looking for a lane and thought he found one beneath Delaware racer Ben Scott, but there was contact and Scott ended up in front of Hardy while Whitener spun but did not stop. The contact caused some damage to the right front of Whitener’s car and, although he started second, he began to drop back, putting Cobb as the heir apparent. Right behind Cobb was 26th starting Kyle Bronson, who looked inside Cobb in a bid for second. Hardy was able to get some breathing room and go on to take the checkered flag for the top prize.

For Hardy, it was vindication for a decision to remain as there was some discussion about making the 15-hour trip to Virginia, but the team opted to stay. Hardy praised the race track for its condition to allow multiple racing lanes, adding he was impressed in his first visit to the Clay by the Bay. 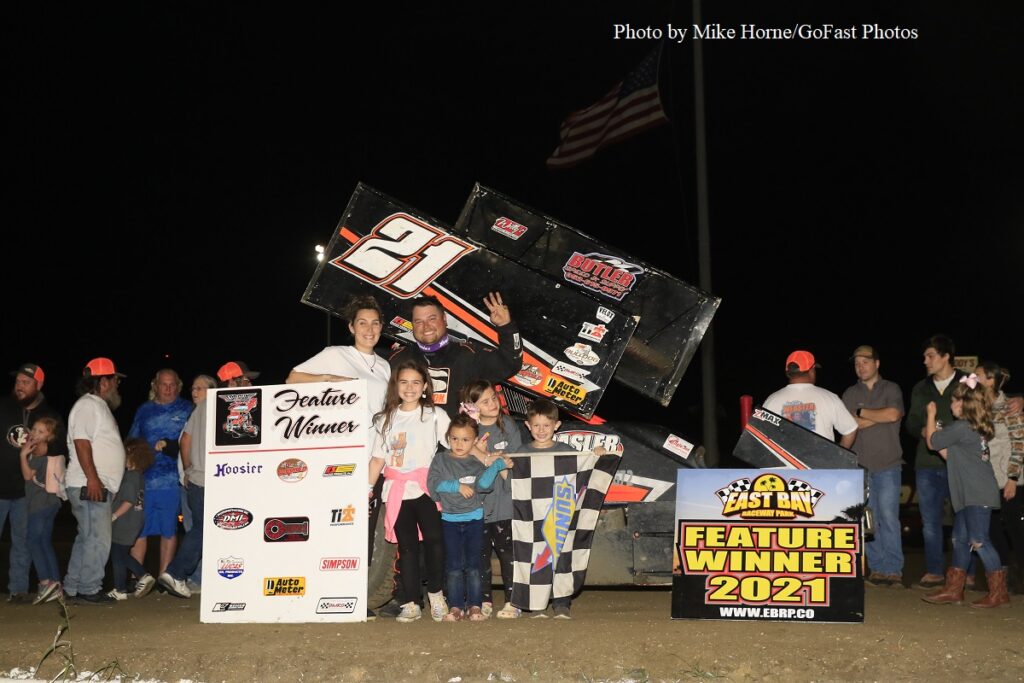 The Top Gun Sprints held their final 2021 Winternationals event with 23 cars on the grounds for the Saturday finale. Billy Bridges dominated the opening heat race, two-time defending champion A.J. Maddox captured the second preliminary and the third heat race saw the fans on their feet for the finish as Joe Zuczek edged Robby Hoffmann by .007 seconds. The heat winners now had their sights set on the $600 offered in the Jeff & Lee Barfield Memorial Clean Sweep.

With fast cars on the front row, it did not take long for the action to get intense. Two-time feature winner Justin Webster rocketed off the pole for the lead as the front cars quickly caught the back of the field. Webster would see a challenge from Hoffmann early on, but the mastery of lapped traffic was again on display. At one point, Webster swept around five cars in the third and fourth turns to find some free space. The position battles were taking place from second back as Shane Butler was finally able to  bypass Hoffmann for second on lap 16.

With all of the action around the race track, the only thing missing was a caution flag as the field of 21 starters kept the caution flag in its holder from start to finish. Webster was able to add his third straight birthday, celebrating his mother’s birthday with a 25-lap victory. The winner told the crowd how the crew found a broken valve spring keeper in an engine inspection and, with the help of other teams who had spare parts and tools, the eventual winner was able to be competitive on the third night of action.

The Crate Racing USA Late Model Series will move on to Clarksville Speedway in Tennessee for their next event February 25-27. Top Gun Sprints will resume their season on March 6 at Hendry County Motorsports Park.