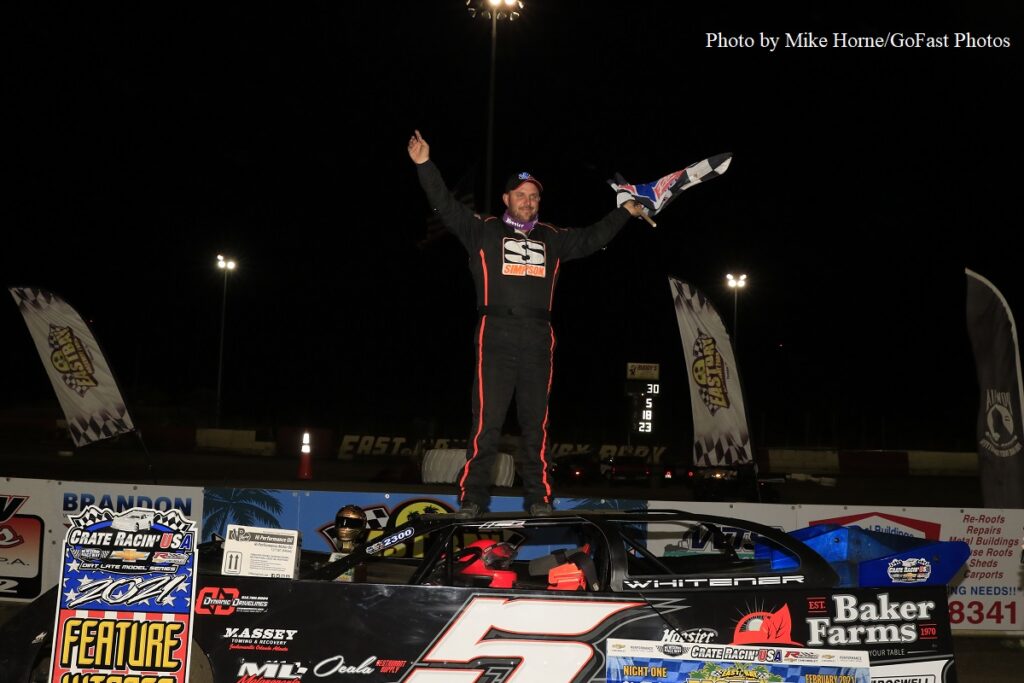 Over 100 cars were in the pit area Thursday night for the next action of the 45th annual Winternationals as the Crate Racing USA 604 Late Models and Top Gun Sprints opened three nights of action. The 78 cars in the 604 Late Models far exceeded last year’s car count of 49 as drivers came from as far away as Minnesota and Texas to compete for the $2.500 top prize in the feature.

A field of 25 cars were presented for the 30-lap main event with Cory Hedgecock utiling a provisional for the final spot. Joiner grabbed the lead at the start with Whitener and Kyle Lukon right behind. Virginia racer Kyle Hardy began using the outside to charge into the top five as the front of the field began to encounter traffic on lap 5. The first caution came on lap six with Iowa’s Todd Cooney slowing on the track. When the green came back out, Joiner used the clear track in front to pick up an advan tage and keep his opponents at bay. Whitener began to reel in Joiner and the field raced to the line on lap 14 with Whitener inching ahead. Fortunately for Whitener, the caution flag for a Keith Nosbisch issue came out after the lap had been scored and there was a new leader. On the next restart, Hedgecoock, who had started last, moved from seventh to the top five. With 10 laps to go, Joiner took a shot to the inside in hopes of a pass for the lead, but Whitener prevailed. The Joiner challenge would end on lap 24 when the Milton, Florida competitor would leap the turn three cushion and climb the wall. Joiner’s misfortune moved the consistent Lukon to second, but Whitener was able to prevail on the final six circuits for the win. The victory makes Whitener the fourth different winner of the Crate Racing USA Winter Shootout in as many races.

The Top Gun Sprints opened their 2021 season with their traditional visit to the Winternationals. A field of 28 cars made their way to the pit area and squared off in four heat races. Each winner of the heat races would put themselves in position to claim the $300 Lee and Jeff Barfield Memorial Clean Sweep bonus if they could back up the preliminary win with a feature victory. Heats were claimed by Justin Webster, Robby Hoffmann, Ethan Barrow and Garrett Green. For Hoffmann and Barrow, the wins came in their first starts with the series. Andy Cobb led the field of qualifiers from the B-main with a decisive pass around early leader Tim George.

The 25-lap feature race required three attempts before the green flag would stay out with Green holding the lead over Shane Butler and Webster. BY the fifth lap, Webster started making his move to the front, passing Webster and, one lap later, moving by Green from a lead he would never relinquish. Green retired on the next lap, giving Webster a clear track in front, but that would only last two laps until the leader charged into lapped traffic. Weaving his way masterfully through the backmarkers, Webster was able to send the message of “catch me if you can” to the rest of the field as no one could get close to the eventual winner.

The first red flag came out with five laps remaining when Nathan Barouch climbed the turn two wall and toppled over. The driver was unhurt. Shortly after that mishap, Butler and Danny Martin Jr. made contact with Martin clipping the front of Butler’s car, sending him airborne.

The Top Gun win for Webster provided vindication for the hard-working Webster family operation that endured setbacks in 2020 through mechanical failures and hard luck. The win gave an extra $300 for the Lee and Jeff Barfield Clean Sweep Award and the message was clear. It is going to be “21 (Webster’s number) in ’21 (the year)” for the upcoming events.

Both divisions return to the track on Friday for the second night of the three evenings on the schedule. 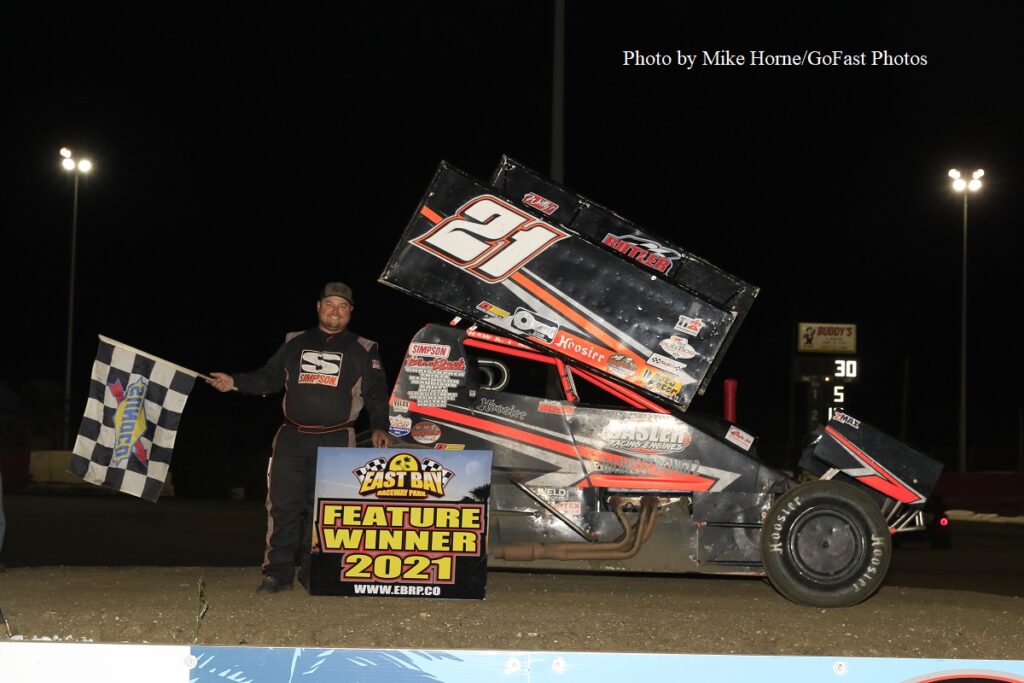