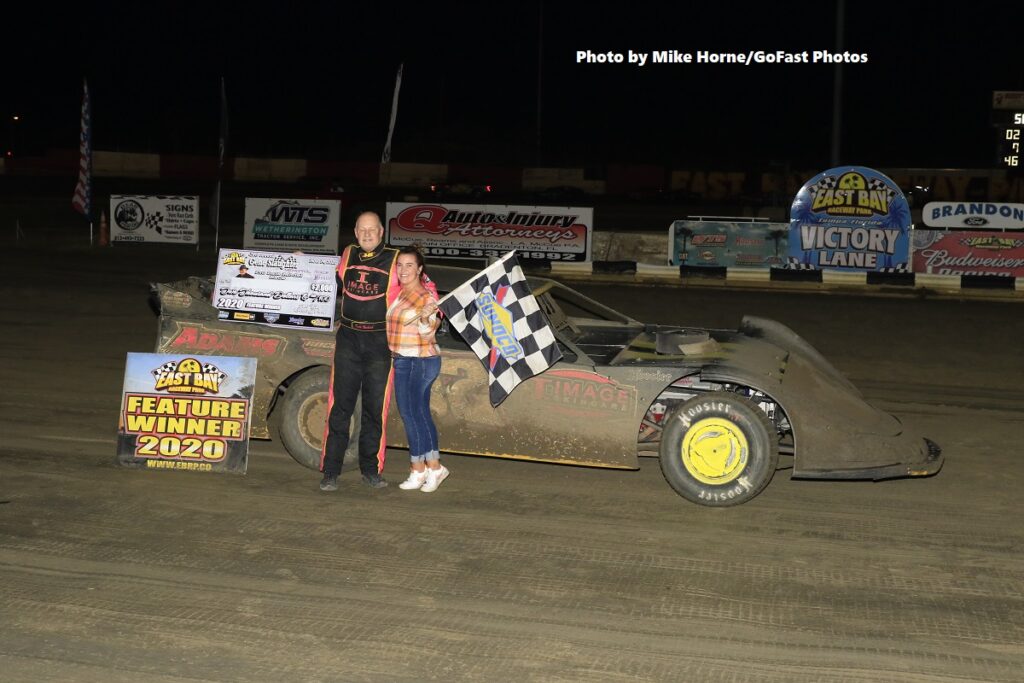 A field of 24 Pro Late Models gathered at East Bay for the re-scheduled running of the Gene “Coyote” Slaughter Memorial, a 50-lap main event for the class. The turnout for the event, postponed from October, was the highest car count of the season.

Ashton Winger, Ivedent Lloyd and Devin Dixon opened the night with heat race wins, but found themselves starting from row two back after the inversion. At the green flag, it was Jimmy Waldrop who took the early lead. On lap three, the lead change took place with Travis Varnadore securing the top spot as the first caution came out. On the restart, Winger would slip past Waldrop with Jimmy Sharpe Jr. grabbing third on lap five. The field was slowed for a Jeff Mathews frontstretch spin and it was Sharpe on the move when the green flag returned, jumping up to second ahead of Winger. The field began to move through lapped traffic by lap 12 and Varnadore was slicing through with ease while Sharpe and Winger were faced with challenges. Those obstacles went away with the next yellow flag for a stalled Dustin Perez. Winger re-gained second place and chased Varnadore until a red flag for a multi-car incident on lap 15. Dixon gained third and briefly threatened Winger until retiring on lap 31.

On the restart, Varnadore began to have issues keeping the car in the racing groove. Keith Nosbisch, who had charged from outside the top five into second, was beginning to pester the leader, finally able to slip by on lap 36. As Nosbisch moved into clear air, Phillip Cobb and Winger put on a battle for second that stretched for three laps before Cobb spun out of position. Attrition was beginning to show as only one-third of the original 24-car fields on the track with 10 laps remaining. Nosbisch would not be contested as he cruised to a decisive win.

George Handy picked up his fourth win of the season, solidifying his point lead with a single event left for the V-8 Warriors. Handy battled Collin Kruse in the early stages, then found a formidable challenge coming from Juston Meeks. Meeks took the lead on a lap 8 restart, only to spin on the exit of turn four and going from first to worst. Heat winner Michael Hart picked up the challenge, but Hart’s second place was snatched by Wayne Kissam until the last lap. Hart was able to get back by, but Handy had the victory in his grasp. Jason Burnside also won a heat.

Stephen Hohlbaugh found himself in a place he didn’t want to be the Outlaw 4 points co-leader watched Vernon Hart Jr. make a pass for the lead at the halfway mark of the 15-lap feature. Hohlbaugh and heat winner Billy Dukes made contact in turn, leaving Hohlbaugh stranded and he was collected by Eric Knight and Mark Moniz. Knight was given his spot back in second behind Hart while Hohlbaugh went to the tail. As the last laps started winding down, Hohlbaugh was charging in pursuit of Hart. As the leader took the white flag, transmission issues rendered the car uncompetitive, allowing Hohlbaugh to slip by for his second feature win of the year.