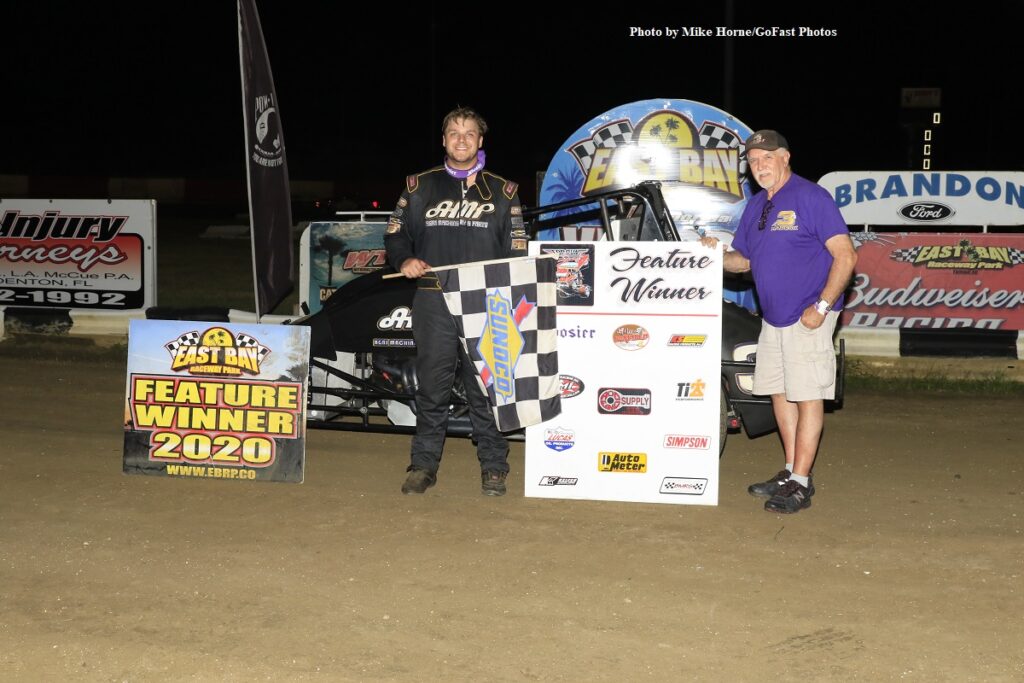 East Bay Raceway Park provided the backdrop for the first non-wing competition of the 2020 season for the Top Gun Sprints with a field of 25 cars answering the call.

Heats were won by Bryan Eckley, Justin Webster, Steve Diamond and Shane Butler, which gave the quartet a shot at an additional $600 with a feature win. The good luck from the preliminaries did not carry through to feature as none of them were able to finish the 25-lap main.

The initial start was waved off after Cole Nichols came to a stop at the outside of turn one. On the restart, polesitter and series point leader Garrett Green fell in behind Shane Butler, but trouble struck when Green went low in turn four and began to flip through the turn, coming to rest in the middle of the track. Green was unhurt. During the clean-up, a fire broke out in Eckley’s car, which was extinguished and the car was pushed back to the pit while the on-track work continued. Nichols was able to return under the red flag and Eckley pushed out in turn to rejoin with no laps complete.

Justin Webster seized the early lead. Going to the top of the track and maintaining a fast pace. The leaders caught the back of the pack by the third lap, slicing through traffic in an attempt to hide from pursuers. A.J. Maddox began to make his move, taking third on lap four and gaining second on the next lap. On Lap seven, leader Webster went hurtling into turn one and hit the wall, collecting Shane Butler and Steve Diamond, ending the night for all three and leading to a red flag for clean-up.

Maddox inherited the lead while the action continued to heat up deeper in the field. Stan Butler passed Andrew Griffin for second with Ryan Bartholomew dispatching Griffin another spot. Three laps later, it was a hard charging Brandon Grubaugh who shot to second with Tyler Clem following through for third. Clem, who started 25th after failing to make the heat, was pressuring Grubaugh until a mechanical issue ended his night early.

The third red flag appeared on lap 18 as Stan Butler collected the frontstretch and did one complete flip. He was uninjured, but the car was damaged to the point of elimination. On the restart, Maddox had the advantage of three lapped cars between himself and Grubaugh and took advantage to scoot away to an insurmountable lead. The win gave the 2019 Top Gun Sprints champion his first series victory of the year and avenged some of the sting from a narrow defeat in East Bay’s last non-wing race in 2019.

Bryan Bernhardt prevailed in the Gael’s Open Wheel Modified main, but it was anything but easy. Bernhardt led the first five laps, only to see Roger Crouse sweep by for the top spot. As Bernhardt dealt with Crouse, heat winner Austin Sanders made it a three-car challenge and the lead was never clearly decided lap after lap through the middle stages. Bernhardt would prevail for his second feature win of the year. Tyler Clem, doing double duty in Modifieds and Sprints, scored a Modified heat.

The last time fans saw the V-8 Warriors in action George Handy won the feature with his wife Kayla close behind. Whether it proved to be motivation or just a desire to not let it happen again, the tables were turned on this night as George would be congratulating Kayla on her first feature victory of the season. She secured the win by passing Gary Lucas on the fourth lap and never let anyone put on a serious challenge, running a consistent line throughout the race. Heats were won by Wayne Kissam and Jason Burnside.

Paul Seburn captured his third Q Auto & Injury Medical Malpractice Attorneys Micro Sprint main, slipped past Jerod Meyers. Seburn had utilized a last lap pass to win the heat, but made his move earlier in this event on a lap 12 restart.

Patrick Tabb grabbed his second Gladiator main of the season in convincing fashion. Tabb, who won his heat race, had to come from the fifth starting spot to get the lead. In her first start of the year, Brittany Hart won the opening heat.