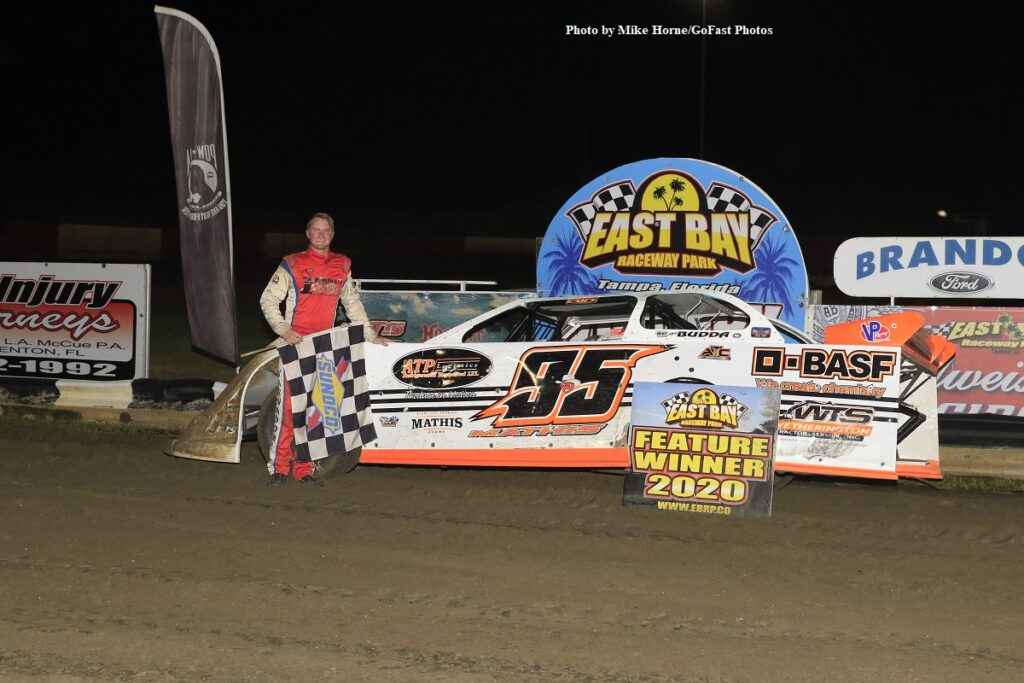 Travis Varnadore found himself in a fill-in role Saturday night for the running of the 30-lap Pro Late Model main event as part of a six-division show at East Bay Raceway Park. Varnadore took the seat of Steve Mathis Jr., who was attending a wedding and found the car to his liking, going wire-to-wire for the victory.

Varnadore had early challenges from Phillip Cobb, but contact in a lead challenge ended up costing Cobb’s right rear tire, forcing him out of the race. That left the responsibility of the challenge to Daniel Woody, who could not close until a late race caution tightened the field. When the green returned, the last ditch effort came up just short and Varnadore claimed his first feature of the year. Heat races were won by Phillip Cobb and Jimmy Waldrop.

Steve Diamond made it back-to-back wins in his 2020 Q Auto & Injury Medical Malpractice Attorneys Sprint campaign, taking the 15-lap event in start-to-finish fashion. Diamond was hounded early by Bryan Eckley, but Diamond maintained consistent lines on the start and restarts to make it impossible to be caught. Defending track champion Joe Zuczek was best in the heat.

When the season opened in March, Richard Livernois Jr. became the first Street Stock driver to be a feature winner. At the end of the 15-lap main, Livernois became the first two-time winner in the class. His work commitments had kept him from the seat, but he did not miss a beat in getting the hang of running up front in the class. Tommy Hill, who finished second in the main, won a heat race to start the night.

Defending V-8 Warrior champion George Handy laid claim to his third feature win of the year, but not without a challenge from a soon-to-be-familiar foe. In the early stages, George Handy had to hold off his wife, Kayla Handy, until Kayla spun in the second turn and fell to the back of the field. Wayne Kissam and Jason Burnside were doing battle to see who could inherit the opportunity to challenge George Handy, only to make contact and take themselves out. When the restart came about near the end of the race, Kayla Handy had worked back to second and she stayed right on the leader’s bumper as the field took the green. George Handy was able to get enough breathing room to pick up the win, but it will be interesting to see what transpires the next time the V-8 Warriors are in action.

Defending track champion Austin Martin zipped past Alex Cline on lap seven to roll out to his second Mod Lite feature win of the year. Cline was the second leader of the race after Andrew Smith set the pace for the first two laps. Bo Bass and North Carolina racer Morghan Johnson were heat race winners.

The Q Auto & Injury Medical Malpractice Attorneys Mini Sprints kicked off the night as heat winner Jamie Tinkham parked in Victory Lane for his first of the season. The former track champion built up a big lead early and made his way through the field, lapping up to sixth place. Tinkham was joined in heat wins by Bruce Comer.