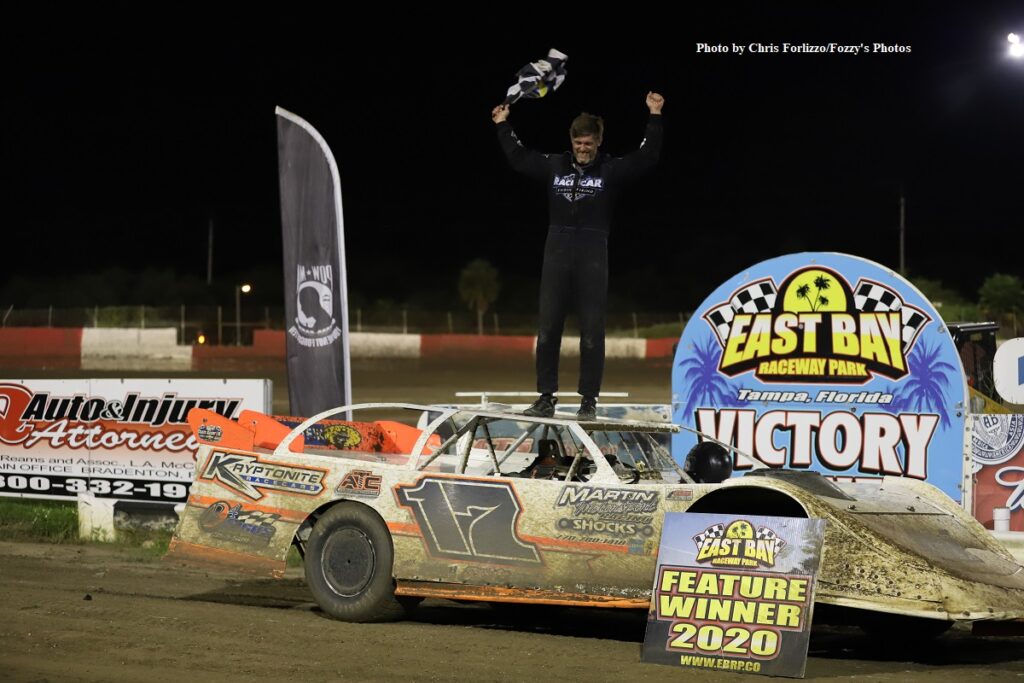 The only 2020 East Bay Raceway Park visit from the Florida Late Model Challenge Series brought the cream of the crop to the Clay by the Bay Saturday night with Nevin Gainey becoming the first two-time winner in the series this season.

Gainey grabbed the lead from the onset, but caution came quickly for a Tom Fiebelkorn spin on lap 2. On the restart, Phillip Cobb moved into second and began closing the gap on the leader. The field again experienced a caution on lap 6 and it took three restarts to get momentum going once again. A lap nine caution for a Hunter Sweet spin racked the field for the next green. As the field thundered to turn two, Cobb spun while running second and the field did a masterful job to avoid making it worse than it was. Series point leader Adam Bedenbaugh made contact with Cobb, but was able to continue and lined up behind Travis Varnadore, who had moved from a starting spot of 11th in the 23-car field to the runner-up position. Turn two continued to give drivers a challenge as a Clay Bedenbaugh spun slowed action again. Larry Perry Jr. brought out the next caution in the same area and Varnadore retired from the race, heading second to Adam Bedenbaugh. A long period of green flag racing saw many position battles, but none of them were for the front spot as Gainey masterfully worked through lapped traffic. In the final five laps, Sweet started marching through the field and held third on the final restart. No one could catch Gainey as the winner went wire-to-wire for his triumph, backing up an earlier win at North Florida.

Three of the remaining four-divisions saw first time winners grace victory lane, led by Steve Diamond, who captured the Q Auto & Injury Medical Malpractice Attorneys Sprint 15-lap feature. Diamond had been an early leader two weeks previous in a Top Gun Sprints race, only to see victory slip away. He would put a strangehold on triumph on this night, running a near flawless race to come home a winner in this division for the first time in his career. Bryan Eckley won the heat race.

Paul Davis became the fourth different winner in as many events by taking the Street Stock feature from start to finish. Davis, who had finished second two weeks before, commented about moving up from third to second then getting the win. Buck Woodhouse won his second heat in as many tries while Tommy Hill claimed the second preliminary.

In Outlaw 4 action, Stephen Hohlbaugh was finally able to break through after numerous top 3 finishes over the past two years. The race was called after 7 laps due to an overwhelming number of cautions. Brittany Folwell won the heat.

Daniel Bowman scored his second feature of 2020 by charging to the lead early. Bowman and brother Kyle Bowman won the heats.