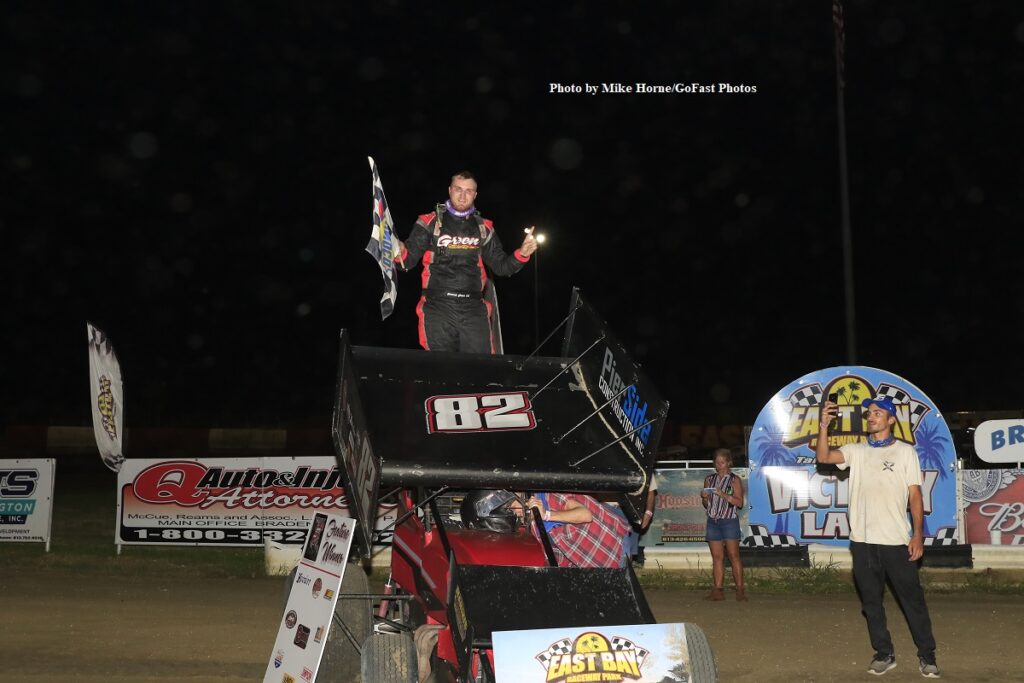 After the planned July hiatus, regular season action returned to East Bay Raceway Park with a six-division program that included the third appearance of the Top Gun Sprints.

The August 1 program marked the sixth appearance of the season schedule for the Top Gun Sprints, who have had to endure everything from pandemic to weather issues in putting the 2020 schedule to work. The series had its last appearance on June 13, so racers were anxious to get back on track. A field of 19 cars past through the pit gate, including 14 of the 15 cars in the point standings.

Heat races were won by Steve Diamond (with an exciting last lap pass), Brandon Grubaugh and Andrew Griffin. This trio of drivers put themselves in position to claim the Lee and Jeff Barfield Memorial award, which paid an additional $300 if a heat winner could repeat in the feature.

Luke Hill would start the 25-lap main on the pole with the three heat winners filling up the next spots. Diamond would take the early lead, but Hill bounced right back to take the top spot on lap two. Griffin moved to second on the next lap as mechanical issues ended Diamond’s challenge. When the caution came out, two-time East Bay Top Gun winner Garrett Green had moved to fourth and started picking off spots when the race returned the faster paced action. Green would secure the lead, bypassing Hill on lap 9 just before a caution was displayed. Grubaugh charged into third near the halfway mark and Shane Butler advanced into the top five by lap 14.

Disaster struck for the race leader on lap 17 as Green suffered a flat tire and the same situation also send Justin Webster to the pits. The crews were able to get the changes made and get the cars back onto the track without losing a lap, but they tagged the end of the field. Hill regained the lead with Grubaugh in second, ahead of 2018 series champion Hayden Campbell. Hill would suffer a flat right rear on the next lap, yielding the top spot to Grubaugh. Campbell grabbed the lead on lap 21 after Grubaugh’s tire issue and a Shane Butler spin tightened the field with Green now in the top three. On the restart, Green moved to second to hunt down Campbell’s whose race ended on lap 24. From the final restart, no one could catch the series point leader, who added his third feature win of the year.

It was another driver named Garret who would stop in Victory Lane when the Gagel’s Open Wheel Modifieds closed off their 15-lap main. Garret Stewart took the lead at the start of the feature, never to succumb despite the challenges of many different drivers who had their own battles to deal with. Devin Dixon and Tyler Clem locked in a late race battle for second, but Clem’s efforts were nullified by a flat right rear tire. For Stewart, it marks an infrequent appearance at East Bay despite the driver’s positive feeling about racing at the Clay by the Bay. “This one has been a long time coming,” he said in Victory Lane. “This is my third feature win this year at three different tracks.” Stewart prefers a dry slick surface, but knew the track would not favor that and chose his set-up accordingly. Bryan Bernhardt and Shane Burrows won heat races.

Billy Barstow recorded his first win in an East Bay Street Stock main by making an inside pass on 2019 track champion Matt Bozeman on lap 9, powering on to the win. Barstow purchased the car in July, only to have it severely damaged on July 17 in a heat race accident. It was the work of fellow competitors Bozeman, Mike Wilson and Derek Gray that put Barstow’s ride on the road to recovery that ended in Victory Lane. Bozeman and Buck Woodhouse won heat events.

Raymond Vann was on a mission in the 15-lap V-8 Warrior main. Vann wasted no time in getting the lead and becoming one of the few to hold off track champion George Handy for a win. Handy and Jason Burnside had captured heat races earlier in the program.

In Mod Lites, 2019 track champion Austin Martin made it clear that he was here to start his 2020 winning ways but convincingly winning the 15-lap feature. Martin had been denied in two previous attempts, but this one would change all of that. He started the night with his third heat win of the year and then made his winning move between Bo Bass and Darren Bass to assert himself at the front. Darren Bass had also been a heat winner.

The Q Auto & Injury Medical Malpractice Attorneys Mini Sprints brought 19 cars to the race action as Kenny Brewer carried a lead in the 15-lap feature from start to finish. Brewer, who last appeared in Victory Lane in 2018, had challenges from heat winners Joe Askew and Jamie Tinkham throughout the event. Brad Sutton also scored a heat win.

East Bay Raceway Park will be in action on August 15 with the Florida Late Models contesting a 25-lap main. They will joined by the Q Auto & Injury Medical Malpractice Attorneys Sprints, Outlaw 4s, Street Stocks and Gladiators.