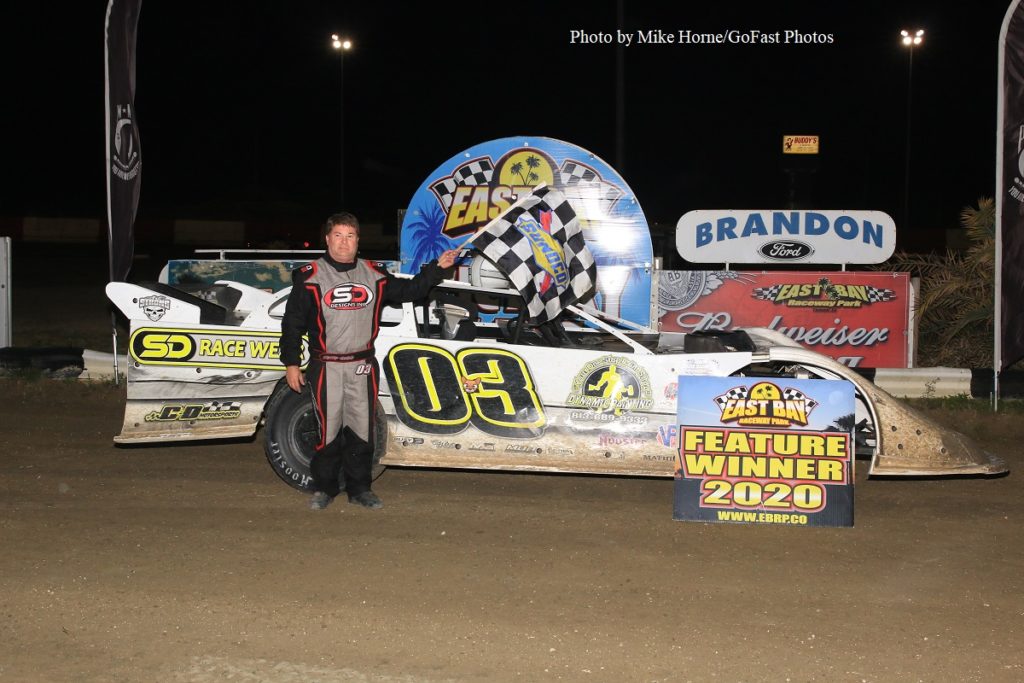 The 2020 regular season got underway with a five-division program, highlighted by a 30-lap main event for the Pro Late Models that ran without a caution flag.

Phillip Cobb grabbed the lead at lap 10 and masterfully picked his way through the field to open his season with a win. Only five cars were on the lead lap at the end and Cobb was threatening to [pass the fifth-place car as the race ended. Steve Mathis Jr. won the division’s heat race.

Cobb was doing double duty on the night, competing in the Gagel’s Open Wheel Modified division, which closed the evening’s program. The field endured several restarts before a lap was recorded and Cobb grabbed the early lead. Defending division champion Bryan Bernhardt stayed glued to the leader’s bumper through the mid-point of the race as the lead duo escaped the late race trouble that developed when third-place Dale Kelley bobbled and collected Brad Goff and Austin Sanders. Goff was able to keep going, but a late race spin pushed the Ohio racer out of the top five. As Cobb collected what appeared to be his second win of the night, the remaining cars were clearing tech. When Cobb arrived, he crossed the scales and the car was too light, handing the win to Bernhardt. Goff and Kelley were heat winners.

The night opened with the Q Auto & Injury Medical Malpractice Mini Sprints. Defending track champion Robby Hoffmann and Dusty Cates claimed preliminaries. The 15-lap main opened with Jamie Tinkham taking the early advantage. Tinkham kept his car on the bottom while Hoffmann was navigating the top of the track. After several laps pf passing the flagstand side by side, Hoffmann gained the advantage near the halfway mark. He opened the 2020 season right where he left off in 2019, capturing the victory.

The Mod Lites returned for their second year of action and a new name was declared from Victory Lane as Bo Bass prevailed in the 15-lap feature. Bass stated that it was a new car that they had started building last November and had problems with it in Winternationals competition. The East Bay race was the first feature where the car had been running at the finish and it ran right to Victory Lane.

Street Stock action capped the night’s events and Rich Livernois became a name to remember for the 2020 season. Competing against the top finishers of the 2019 points race, Livernois kept his shiny #71 glued to the bottom. He swept past early race leader Matt Bozeman on a lap three restart and moved into a comfortable lead. Bozeman was giving chase until contact with a sinning Doug Johnson claimed the right front of Bozeman’s car, ending his night. Livernois had been the class of the heat race earlier in the night.