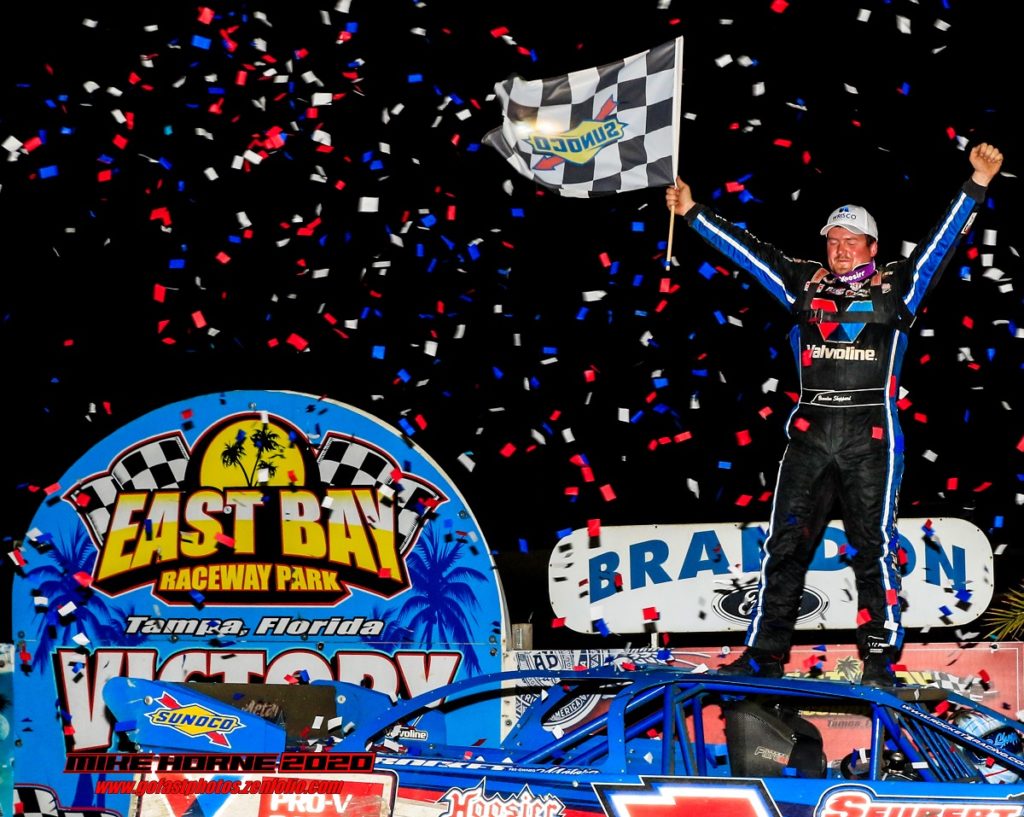 Brandon Sheppard charged from his 12th starting spot to take the lead on lap 14 and then never looked back in claiming his second Wrisco Industries Winternationals victory of the week on Thursday Night at East Bay Raceway Park in the Lucas Oil Late Model Dirt Series-sanctioned event.

Sheppard was the fourth and final different leader of the race after Brandon Overton, Tim McCreadie and Boom Briggs each took a turn at leading the race in the first 14 circuits.  Sheppard held a 1.7 second advantage over Richards at the finish line.  Richards who was originally slated to start 20th started in the back row after a rules violation before the race.  Richards then charged to the front in the Clint Bowyer Racing IRacing Rocket to finish second behind the team he drove successfully for several seasons.

Overton who earned the PFC Brakes pole award by winning the first heat was looking to break in the winner’s circle for the first time in the Georgia-Florida Speedweeks after coming up with 3 second place finishes in the fist four races.  The 40-lap feature started off good for Overton and points leader Tim McCreadie as the pair raced side-by-side in the early stages of the race.

Overton led the first lap then McCreadie took over the race lead for two laps, but by lap four Overton was back in front in the battle of a pair of Longhorn Chassis drivers.  By lap 6 however McCreadie was back in front as Boom Briggs started to show his strength working his way to second place.  Briggs then made a power move on McCreadie on lap 10 take over the point.

Briggs then held the lead until Sheppard who had started on the outside of the sixth row for the second night in a row zipped by for the lead which he never would relinquish. Sheppard then held off a trio of drivers in the last half of the race to record his 17th career LOLMDS win and his fifth at East Bay.

Richards then moved past Moyer Jr. on lap 33 but ran out of time in his efforts to catch Sheppard.

“It’s all thanks to my guys for not giving up on me. Our qualifying efforts weren’t what they needed to be tonight, for sure, and you know, Mark Richards and Steve Baker (of Rocket Chassis), and my great crew, Dan, Austin and Joel, the guys stuck behind me the whole time. They were confident I could get up through there,” said the Illinois native.

“I’ll tell you what, I think I’m going to have gray hair by the time we leave here. … You just don’t know where to go. I knew at some point the (high-side) cushion was going to be the place to be, but the bottom, it was working for me there at the beginning of the race, and I just, you know, you don’t really know when to move. So, I just stuck with it and stuck with it and then I see 14 (Richards) on the board there, and I knew I had to get my elbows up.”

“Man, it feels good to be up here again. Hopefully, I think we may be learned a little bit about the car tonight, so hopefully we can get our qualifying efforts a little bit better tomorrow, so I don’t have to work as hard tomorrow.”

Richards will have to wait another night for his 8th career win at East Bay , but 2017 LOLMDS champ has a car capable of winning before the week is done. “We’ll certainly take it. Brandon’s been really good, and I just can’t thank those guys enough for the help (from) my dad and everybody … We’ve had a great car in the feature, we just haven’t been able to show it. “We’ve just gotta get a little bit better and starter (closer to the front) and I think we’ll be there.”

After a solid start to the week Moyer Jr. bounced back from a rough Wednesday Night finish. “First thing, congrats to the 1 and 14. The guys were on it. I didn’t have nothing for (Sheppard). I think that one caution, my right-front (tire) completely went away, and I couldn’t run that bottom like earlier in the race. Then you just gotta go up there and run like an idiot around that top and steer with the back tires, but this Capital Race Car’s awesome. I’m just tickled to death to drive it.”

“We didn’t need that one long caution. I think we’ve might’ve had a shot at second, but I didn’t have nothing for Sheppy and them guys.”

“I got my daughter and my wife watching, and all the family, my brother’s probably yelling at the TV. So, it’s nice to finally get on the screen. After last year, I didn’t know if I’d just forgot how to d