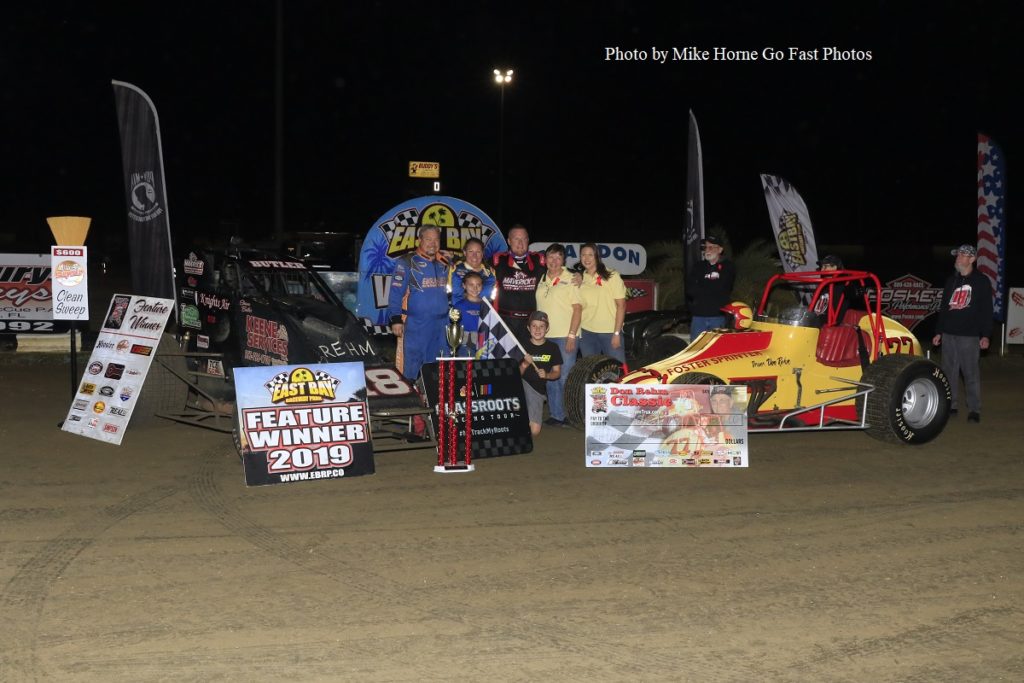 For the Top Gun Sprint Series, the Don Rehm Classic gives the teams a chance to take off the wings and do battle at the Clay by the Bay. Entering the contest, which is the final event of the Top Gun Sprints regular season, two-time series champion AJ Maddox led the points by 20 over Keith Butler.

Maddox would get started on the right foot by winning heat race, joining Andrew Griffin and Shane Butler as the trio of drivers who had the shot at the Lee and Jeff Barfield Clean Sweep Award, which offered $600 on this night.

Maddox and Butler would share the second row at the start of the 25-lap main event with Griffin poised on the inside of the third row. At the start, Billy Boyd and Bryan Eckley put themselves in position to have a say in the outcome, but Shane Butler would be running third for the first caution. It wouldn’t take long for Butler to assert himself into the lead on the restart as the race enduring a few early cautions. Maddox made the move to take second the seventh lap, but the leader was hiding among lapped traffic. Butler masterfully worked his way through the field to keep the point until a mid-race caution bunched the front runners again. As the second half began, action again centered on the lead two cars with Maddox pulling a slide job for the lead, only to have Butler take it right back by turn one. The final caution flew on lap 22 when Tim George and Boyd tangled in turn three, setting up a shootout to the finish. The lead changed hands four times in the last two laps and the two raced off turn four to Derek Powell’s checkered flag in a photo finish. It was Butler who claimed the win by the slightest margin, but his second place finish gave Maddox his third series title.

John Inman etched his name in the record books, capturing the opening feature in the Q Auto & Injury Medical Malpractice Attorneys Micro Sprints. Inman took the lead on the third lap of the 15-lap main that ran without a caution flag. Corey Dyal and Larry Rarer took home heat wins.

Street Stock action saw a familiar face in Victory Lane as 2018 division champion John Bradley made the most of his infrequent appearances. Bradley thanked Bud his car owner who wanted to go racing tonight. Bradley grabbed the lead with a masterful outside move on a lap 2 restart and kept Jerry Bruce at bay throughout the remainder of the contest. Bradley and Tim Gay won heat events.

Raymond Rogers Sr. and Nick Brown took heat wins in the V-8 Warrior class, which saw a number of new competitors. Juston Meeks took the early lead in the feature, but Wayne Kissam assumed command on lap 3. Nick Brown was lurking and made his move to the front on lap 7. George Handy followed through to take second and set up a strong battle to the finish. Brown refused to give up the bottom line, forcing Handy to the high side for a lap 13 pass for the win.

The final feature of the night saw the Studio Red Salon Gladiators put 20 cars on the track for their 15-lap finale. Heat winner Kyle Bowman notched the fifth feature win of the season. The winner was celebrating the win and the birth of a child who arrived on Thanksgiving, giving credit to the crew members who prepared the car for the night while he was attending to being father of a newborn. Bowman was joined by Robert Kissam as heat race winner earlier in the night.