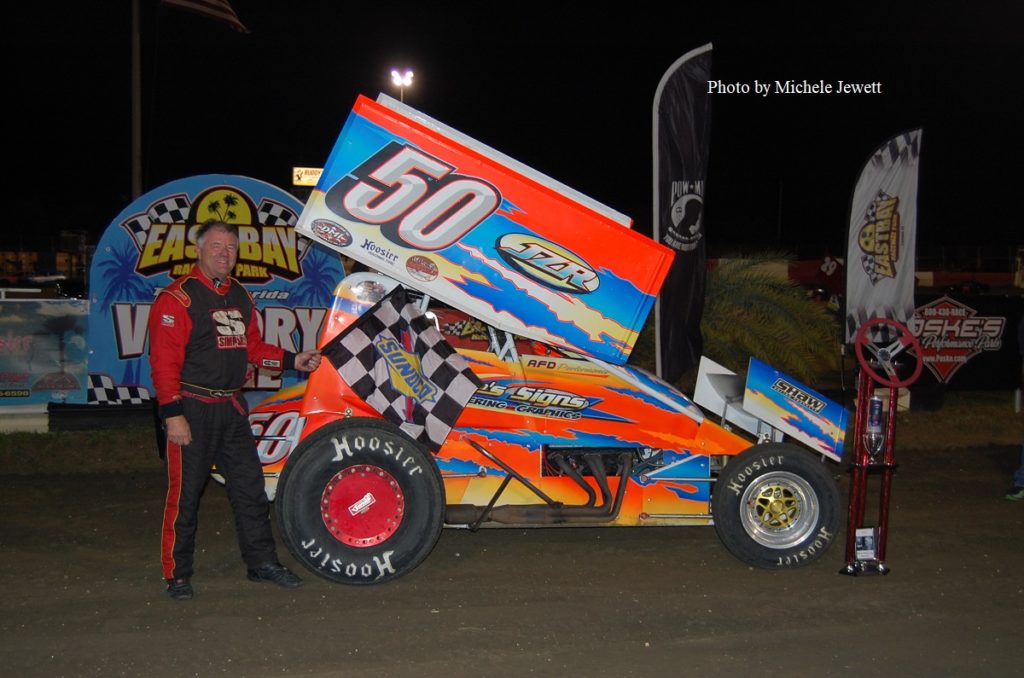 A field of 13 charged to start Derek Powell’s green flag to open up the action.  Harley Zimmerman grabbed the early lead, only to lose control in the fourth turn and get sent to the tail. Billy Boyd Jr. inherited the point and began to fight off the forward movement of 2019 feature winner Robbie Smith. The duo traded the front position each lap until Smith gained the spot on lap 8. His time in the lead would be short as Joe Zuczek, who had been battling Andrew Griffin for third in the early stages, made the decisive pass at the halfway mark to sweep past Smith and Boyd for the lead. Griffin followed through for second until a lap 16 spin put him out of contention. Zuczek endured some late race cautions, but managed to keep ahead of Smith. Zimmerman rallied back to nearly make his way to the lead lap and ended up third. Only Zuczek and Smith were on the lead lap when the checkered flew. Smith and Griffin won their heat events.

Keith Nosbisch had to hunt down early race leader Josh Peacock, who had inherited the lead from Jimmy Waldrop, to secure the top spot in the Pro Late Model 30-lap feature. In gaining his eighth feature win, Nosbisch grabbed the lead on the 14th lap to hold it for good. Travis Varnadore had a good run going and pushed to the rear of the leader, but could not seize the lead. Nosbisch and Adam Boyd had won the heats.

Paul Davis appeared to be on his way for his first East Bay Raceway Park feature event in Street Stock racing when disaster struck. Davis lost control just after taking the white flag, allowing Thomas Pratt to sneak by for the victory. Pratt backed up his earlier heat race win with point leader Matt Bozeman on top in the first preliminary.

A new name graced Victory Lane in Outlaw 4 competition. Eric Knight pestered point leader and race leader Brandon Yates and made the late race pass to roll to his first win after a number of runnerup finishes. Cecil Martin, who experienced mechanical issues in the feature, claimed the heat.

In V-8 Warriors, it appeared Collin Kruse had won his second feature of the year, but the tech man felt otherwise. Kruse was disqualified and George Handy gained his seventh feature victory of 2019. Handy and Nick Brown started their nights with heat race wins.

Robby Hoffmann became the first driver in 2019 to 10 feature wins, continuing his dominance in the Q Auto & Injury Medical Malpractice Attorneys Mini Sprints. Hoffmann, who earlier received his bonus check and trophy for winning the Mini Fall Brawl, was able to take the lead on lap 5 and head out for the win. Hoffmann and Dusty Cates found heat wins.

The Studio Red Salon Gladiators 15-lap feature was run with few cautions and plenty of three-wide racing. With position battles on each lap, there was no shortage of excitement. Ay the head of the field, point leader Logan Casteel and three-time feature winner Kever Raulerson were determined to fight to the finish. Raulerson, who had been dealing with ground issues with the car, causing him to miss a number of races, picked up where he left off and gained his fourth win. Raulerson won his heat as did Kyle Bowman.

Charlie Sanders enjoyed the spoils of a heat race win in the Florida Old Time Modifieds and then backed it up with a win in the feature. Sanders took the early lead, but an early spin put him well behind the pack. Undaunted, Sanders chased down the competitors and made the winning pass on Jamie Frankland to claim his first feature “in a long time”.

The next action at East Bay Raceway Park will be held on Saturday, November 30 with the running of the Don Rehm Classic for non-wing Top Gun Sprints. They will be joined by Late Model Sportsman, Street Stocks, V-8 Warriors, Studio Red Salon Gladiators and Q Auto & Injury Medical Malpractice Micro Sprints.