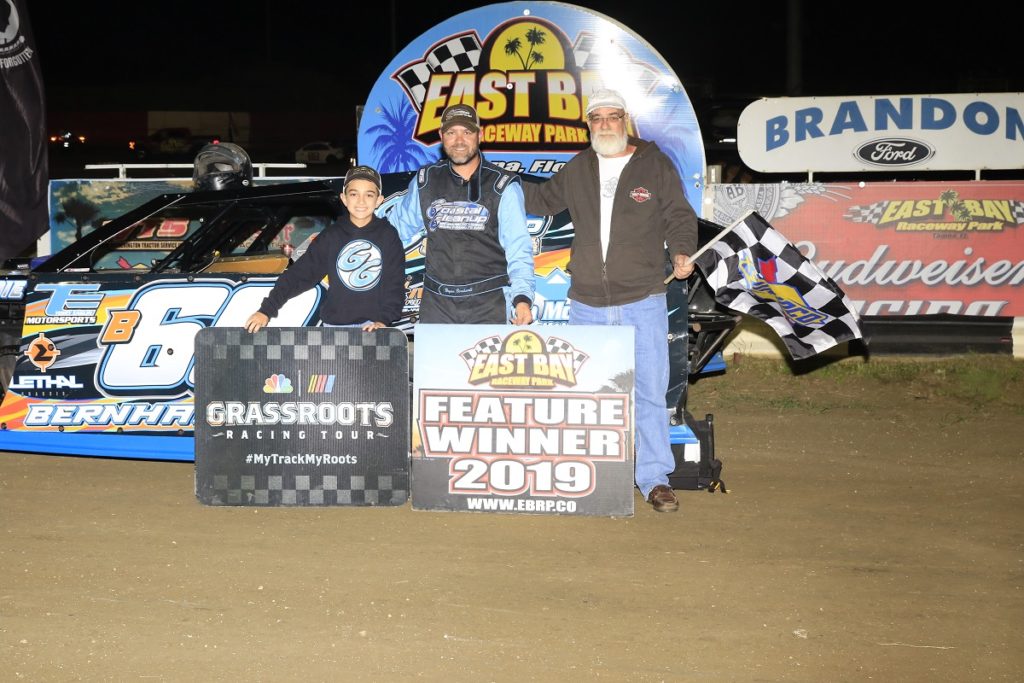 Defending Gagel’s Open Wheel Modified track champion Bryan Bernhardt parked in Victory Lane at the conclusion of the Larry Miller Memorial 50-lap race, but it was not an easy win.

Bernhardt took control at the start of the race, but faced constant challenges from Phillip Cobb and Jeff Mathews through the early green flag laps. The caution first waved when Austin Sanders clipped a barrier and spun, relegating Sanders to the rear of the 15-car field. The yellow flag would appear three more times in the next four laps, giving the leaders a difficult stretch to maintain any advantage over competitors. Cobb and Mathews were both able to sneak past Bernhardt on a lap 13 restart, but the situation was wiped out by a Don Crandall spin, giving Bernhardt his spot back. When the race went green, it was Billy Howard who vaulted from fourth to second, a place he would hold when the caution appeared a lap later.

On the next restart, Mathews would again become the challenger and make a successful pass for the lead on lap 19. It would take Bernhardt just two laps to grab the top spot again, just before another caution showed. By this point, a new challenger emerged and it was Sanders who had to claw his way through the field from the lap 7 incident. Sanders would pull alongside Bernhardt as the pair ran clean throughout a long green flag period. The caution came out on lap 32 when Travis Varnadore had a tire issue. On the restart, Mavrick Varnadore briefly captured second, but the caution flags were not over. Dale Kelley spun with five laps to go and Billy Howard went around with only two laps remaining. The green-white-checker run was all Bernhardt, who fought for control of his car throughout the late stages, but his well-prepared machine was up to the task as he celebrated his sixth feature of 2019.

George Handy joined the “Six Feature Wins” club earlier in the night by capturing the V-8 Warrior main. Handy opened the race on the pole and was able to move away from challengers in short. Jason Burnside won the heat race for the division.

Forrest Gough added his fifth win in seven starts by topping the Late Model Sportsman 15-lap feature. Tanner Cobb added his first heat race win of the year to start the night in a positive direction.

Doug Dyal endured mechanical issues throughout the early part of the season, but he threw the proverbial monkey from his back last week with a win in the Q Auto & Injury Medical Malpractice Attorney Micro Sprints. On this night, he backed up his effort with a wire-to-wire win in the class feature that saw no cautions. Chris Livernois Jr. and Bill Gise, making his first East Bay start in 2019, won the heat races.

Patrick Fiore captured his second feature win in the Studio Red Salon Gladiators action, keeping the car on the bottom of the race track throughout the event. He had his hands full throughout the race by the challenges of Tracy Maynard, but Fiore was not to be denied.

In the Florida Old Time Modified feature, Dan Darnell’s #111 came home victorious, but there was a new driver climbing from the car. Tim Gay, no stranger to Victory Lane in his Street Stock efforts, was able to drive the car on a special night. For this week’s race, the car was powered by an engine that had been built by Tim’s late father Gary. Jamie Frankland claimed the heat race.