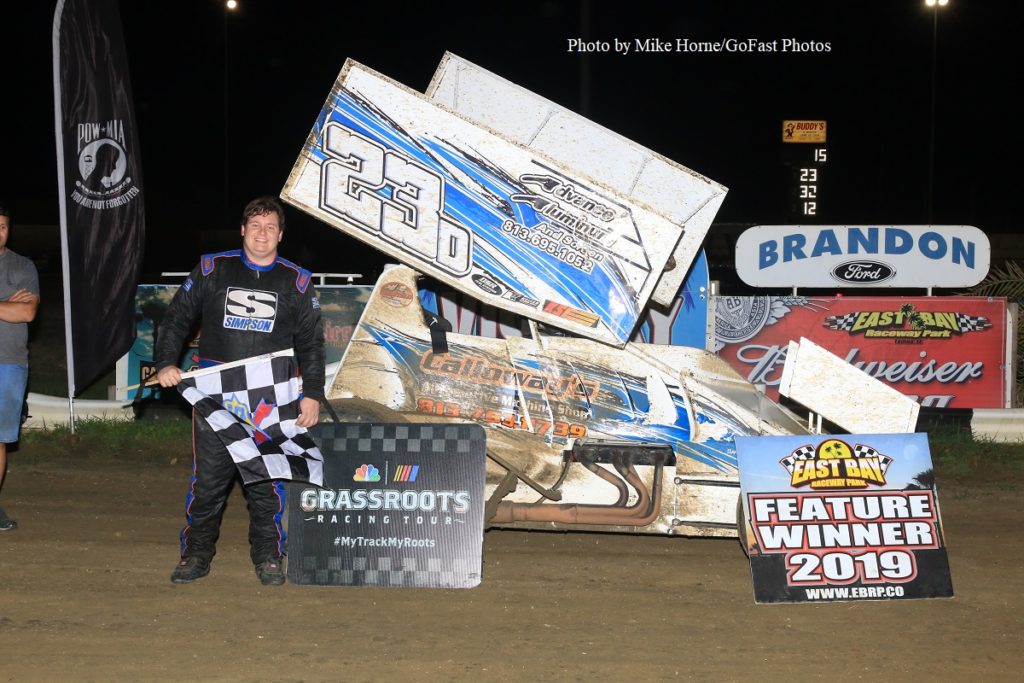 With 10 divisions on the schedule for the second Full House Night of 2019, anything can happen. The night also features Veterans Appreciation and an intermission that invited kids to go trick or treating on the frontstretch. Many of the 100 competitors brought their cars and candy to the delight of the young fans.

The racing action opened with the final 2019 appearance of East Bay’s newest class, Mod Lites. By virtue of his appearance, Austin Martin secured the track championship, but he crowned his achievement by scoring his fifth feature win of the season. Martin started fourth and grabbed the lead on the first lap to go wire to wire. Runnerup Alex Cline started from the last row and gave a great effort for his best finish of the year.

The Outlaw 4s hit the track for their 15-lap main and it was all Brandon Yates. The 2018 division champion pulled off the flag-to-flag finish en route to his fifth main event.

The V-8 Warriors race offered up plenty of excitement. Early race leader Juston Meeks had to fight off the challenges of several top runners. With a handful of laps remaining, Wayne Kissam kept trying to squeeze past the leader on the backstretch, but could never seal the deal until lap 12. Once Kissam got by, he motored away to record his first checkered of the season.

The Q Auto & Injury Medical Malpractice Attorneys Micro Sprints also saw a first time winner. Doug Dyal slipped past Larry Rarer on the first lap and was never challenged for the 15-lap feature. Corey Dyal rallied back to claim second, providing vindication for the D & D Motorsports team that had experienced more than its share of hard luck until tonight.

The first Late Model Sportsman feature race since May proved to be another race that resulted in a first time win in 2019. Waylon Haynes, who had gone above and beyond in assisting track efforts to prepare the surface through a long period of running in the track, was strong in his feature and prevailed. Roger Crouse had the early lead until the halfway mark when he was sidelined by mechanical issues. Haynes inherited the lead and made the point count as he powered his way to the finish.

Dylan Colding added his first win of the year in the Q Auto & Injury Medical Malpractice Attorneys Sprints. The former track champion expressed that he had been discouraged and contemplating giving up, but his fiancée wouldn’t hear it. Turns out she was right as the 23D looks to be back on track.

The Studio Red Salon Gladiators offered the largest field of the night with 19 cars scheduled to take the green flag. In a wild slam bang affair, it was somewhat fitting that the car parked in Victory Lane on Veterans Appreciation Night would be driven by a current member of the U.S. Air Force Reserve. Kyle Bowman scored his third feature win of the season, tightening the points race in the process. New Point leader Logan Casteel backed up his two victories with a second place run tonight.

The Gagel’s Open Wheel Modifieds were using tonight’s 15-lap feature as a tune-up for next week’s Larry Miller Memorial (postponed from Oct. 19). Point leader Bryan Bernhardt took the lead, but there was plenty of position changing going on behind him. In the late stages, it would be Austin Sanders to take up the charge. While Sanders closed the gap, he ran out of time and Bernhardt was parked in Victory Lane for the fifth time in 2019.

Jeff Mathews started deep in the field in the 30-lap Pro Late Model main and had his work cut out for him. Mathews, who was doing double duty having just competed in the Modified race, fell back early but picked up the charge to be in the mix by the halfway point. Jimmy Waldrop established a torrid pace, but several restarts caused the distance between the leader and the field to be diminished regularly. On one restart, Waldrop and Keith Nosbisch made contact, ending Waldrop’s night. Mathews had been second on the restart, so he inherited the lead and that was the end of the story. It was Mathews first Pro Late Model win of 2019.

The final feature saw Street Stocks cap the night and a new name added to the list of main event champions. Mike Wilson moved from the outside pole to snag the lead. Working the bottom of the track, Wilson held off persistent challenges from Paul Davis and then point leader Matt Bozeman to come away with the feature win.