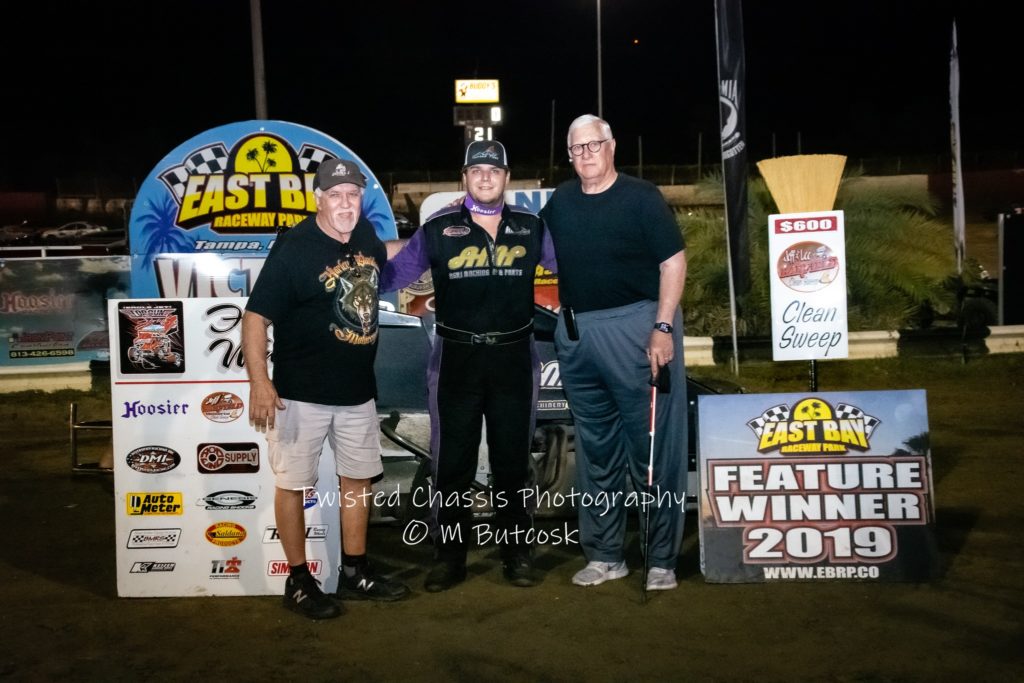 After a wet week for some in the Tampa Bay area, the weather was perfect for an awesome night of racing at East Bay Raceway Park.  With six classes in action, it meant there was something for everyone, from Mini-Sprints to the old time modifieds, the Saturday night show was on.

The night started with the V-8 Warriors, 10 cars took the green flag.  George Handy and Gary Lucas battled most of the race with Handy coming out on top at the end.  Handy’s feature win was his 5th of the season.  Lucas finished 2nd.  Jason Burnside, Kalen Maynard and Wayne Kissam rounded out the top 5. Handy and Kevin Cassaday won the heat races.

Next up was the Q Auto and Injury Mini Sprints, Robby Hoffmann had the car to beat going into the feature event.  Steve Diamond and Jamie Tinkham gave Hoffmann all he could take but, in the end, it was Hoffman taking with victory.  The feature win made it 9 appearances and 9 feature wins for Hoffmann.  Tinkham finished 2nd, Diamond ran strong all night and came home 3rd.  Dirk Miller and Zach Amundsen rounded out the top 5.  Hoffman and Kenny Brewer won the heats.

In the Street Stock division, Justin Rodgers took home his first feature win of the season as he battled with several drivers for the victory.  Jerry Bruce was one of those drivers but his car was found to be “too light” in postrace inspection.  Matthew Bozeman finished 2nd.  Mike Wilson finished 3rd.  Justin McGauly and Billy Barstow rounded out the top five.  Wilson and Bruce were victorious in the heat races.

The Gagel’s Open Wheel Modifieds saw a dominating performance turned in by Bryan Bernhardt as he picked up his 4th win of the year.  Early on, Travis Varnadore gave Bernhardt a strong challenge but he faded as Bernhardt’s car got stronger.  Varnadore finshed 2nd. Dale Kelley hung around in the top 5 all night long turning in a solid performance.  Drew Jackson and Frank Lewis rounded out the top 5.  David Pollen and Varnadore took the checkered flag in the heat races.

The main event of the night was the 25-lap feature event for the Top Gun Sprints.  20 cars started the feature, which was marred by caution flags.  Several cautions early did not stop AJ Maddox who seemingly had the strongest car on the track.  On every restart, Maddox would jump out in front of Bryan Eckley, who was strong as well, but could not find his way around Maddox in the end.  Eckley finished 2nd.  Matt Kurtz, Garrett Green, and hard charging Sheldon Kinser, Jr. rounded out the top 5.  Kyle Connery, Maddox and Eckley won the heat races.

The 20 Gladiators that started the feature put on a good show for the fans with two and three car battles throughout the field.  Kever Raulerson , Robert Kissam and Daniel Bowman fought for the lead early. Raulerson’s car had mechanical issues and Bowman’s car fell back.  Logan Casteel hung around near the front battle for the entire race and, in the end, he was victorious.  It was his 2nd feature win of the season.  Tracey Maynard finished 2nd, Rodney Martin, Hunter Lovelady and Patrick Tabb rounded out the top 5.  Bowman, Kissam, and Raulerson won the heat races.