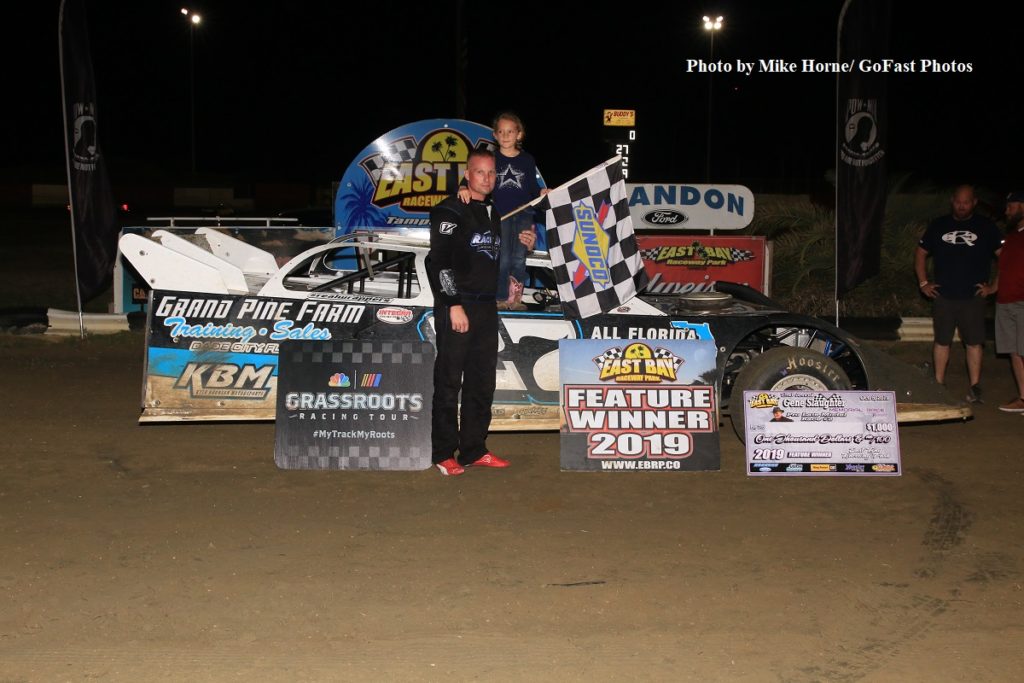 With just under 100 cars in the pit area, fans at East Bay Raceway Park were treated to some exciting racing for the start of the month of October.

A field of 23 would gather for the first event. Phillip Cobb had the early lead, but found himself challenged by six-time feature winner Keith NOsbisch. On a lap five restart, Nosbisch was able to make his move for the lead. Things got a little hairy when the leaders hit lapped traffic on lap 10. Tommy Prince spun in the backstretch with the car of John Norris climbing onto the disabled racer. Only quick action saved leader Nosbisch from being caught up in the melee. On the restart, Tarvis Varnadore was able to shoot past three cars to move into second and begin to harass the leader. After initially slipping back, Mathews was able to work back into the conversation, passing Varnadore. At one point, Mathews slipped past the leader, but Nosbisch was able to duck down to reclaim the position and roll on to his seventh win of the year.

In the second feature, which saw 21 cars take the green, it was all about Bruce Harvey. Masterfully working his way through traffic, Harvey was able to focus on his own race and not worry about the ones trying to catch him. It proved to be the winning formula as Harvey took home his first East Bay Pro Late Model main event. Nosbisch was charging to the back bumper of the leader with two laps to go, but the steady drive by Harvey denied a repeat winner.

This night also saw the second night of the Mini Fall Brawl and the competitors in the Q Auto & Injury Medical Malpractice Attorneys Mini-Sprints responded in a resounding fashion. Last month, there were 30 cars on hand for the opening round and this time, the car count climbed to 35. The large field brought the first B main in a division since the Winternationals. Four heats were won by Dusty Cates, Robby Hoffmann, Robbie Smith and Bruce Comer. From the start, Hoffmann made a statement that would not be denied. Grabbing the lead as the field completed its first lap, Hoffmann stretched out an insurmountable lead, Despite three yellow flags bunching the field, there would be no denying Hoffmann’s return to Victory Lane, running his regular season win streak to 8 races in addition to Winternationals victories in 2019. The B main was won by Zack Amundsen, who was unable to compete in his heat race, but led the four transfers from the consy.

The evening’s activity opened with Mod Lites and the class saw a new winner in Victory Lane at the end of the 15-lap, 17 car feature. Darren Bass swept by point leader Austin Martin in heavy traffic to pull out to the top spot on lap five. Bass kept up the assault through the field and he was never challenged en route to the win. Tim McLeod and Larry Hubbard Jr. opened the night with wins in their preliminaries.

A new winner was also crowned in V-8 Warrior action as Collin Kruse took over to claim the win in the 15-lap main. Kruse and Nick Brown were respective winners of the heat race.

Danny Bowman brought home the wins in the heat and feature for the Florida Old Time Modifieds.