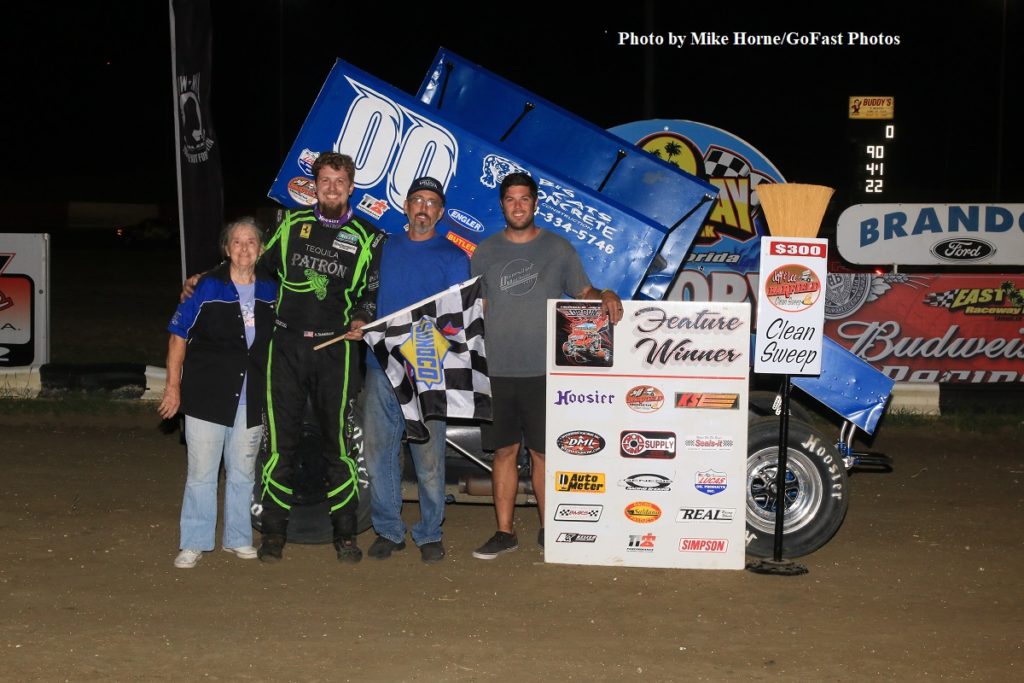 For the first time in over four months, the Top Gun Sprint Series made a return to East Bay Raceway Park in front of a crowd hungry for winged Sprint action. At the end of it all, a new East Bay winner stood in Victory Lane, thanks to a late race pass that opened the door for victory.

Harley Zimmerman slipped past Brandon Grubaugh on lap 24 of the 25-lap main to secure the win. Zimmerman and Grubaugh had been locked in battle throughout most of the race, but it was a battle for second most of the time. Race leader Billy Bridges was able to keep the hard charging duo at bay through most of the contest. Grubaugh took the lead on lap 17 and held the point until Zimmerman came calling.

With his win, Zimmerman picked up an additional $300 in the Jeff & Lee Barfield Memorial Clean Sweep, a bonus offered to a heat race winner who captures the feature. AJ Maddox and Grubaugh were other heat winner

The race got off to a slow start as a multi-car crash saw the car of series point leader Keith Butler on its side before a lap was complete. Butler’s crew was able to make the repairs needed to get him back into action before losing a lap. The race was red flagged a second time when DJ Peeples experienced handling issues and a hard-charging Tim George had nowhere to go, flipping along the front stretch fence and destroying a fast race car.

The annual Gary Gay Memorial for Street Stocks drew a field of 21cars for a 25-lap main. Defending champion Tim Gay started the feature on the pole, but it was outside polesitter Tim Powers who asserted command. It was clear that Gay wanted the repeat win, but Powers would not give up the top spot. At race end, it was Thomas Pratt who had the best shot, but Powers was not to be denied, capturing his first East Bay win of 2019. Heat victories went to Gay, Pratt and Powers.

The Q Auto & Injury Medical Malpractice Attorneys Micro-Sprint main had all of the makings of business as usual as point leader Larry Rarer had worked to a comfortable lead in pursuit of his sixth straight main. With two laps remaining, a mechanical issue stymied Rarer’s bid, handing the lead to heat race winner Joe Taylor. Taylor’s luck would not be much better and an opportunity was presented to second generation racer Jerod Meyers, who would not be denied. Meyers brought home the family ride (complete with a “For Sale” sign) to score his first win of the year in a race that saw three different leaders in the last two laps.

Point leader George Handy asserted himself early to secure his fourth feature win of the year to open the Saturday program, backing up his heat win of earlier in the V-8 Warrior division.

Brandon Yates continued his dominance of the Outlaw 4 class as the defending champion rolled to his fourth straight win. Yates and Eric Knight finished on top in the heat races.