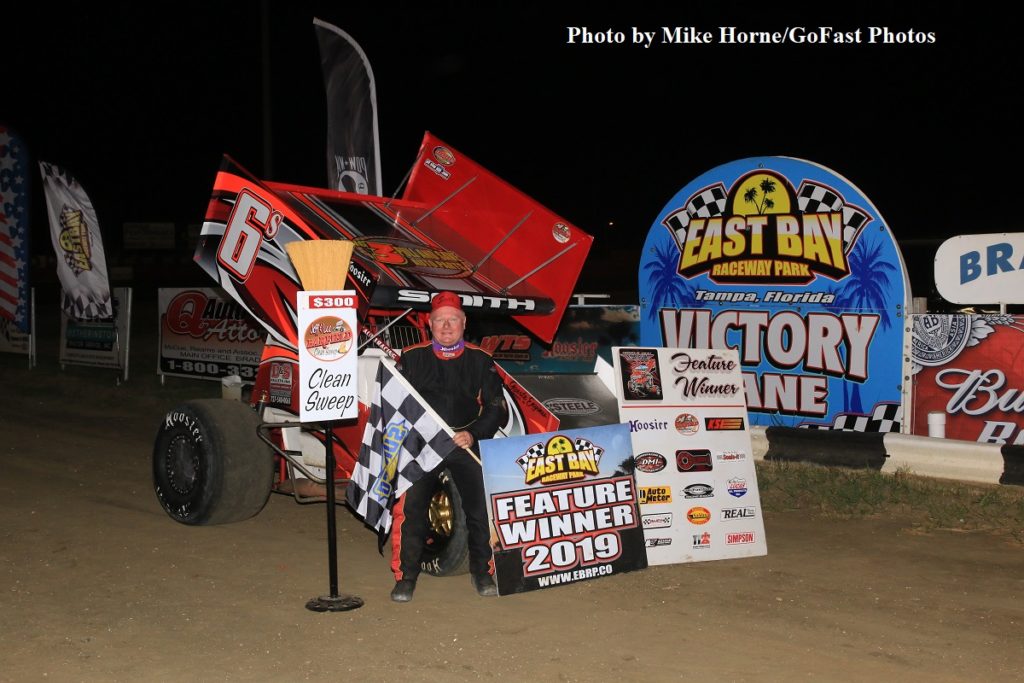 Smith, who had his heat earlier, captured the lead on the third lap and utilized strong restart and consistent lines to strike the winning combination. Because of his win in the preliminary, Smith claimed the Jeff & Lee Barfield Memorial Clean Sweep Award, which paid an additional $300.

Heat winners A.J. Maddox and Dylan Colding were in hot pursuit as they had a shot at the extra money, but Smith would not be denied.

The event was the fifth completed event of the year for the Top Gun Sprints and Smith joined Maddox and Garrett Green as victors in the 2019 campaign. Top Gun Sprints will return to East Bay on August 3.

Bryan Bernhardt notched his third feature win in Gagel’s Modifieds, fighting off the challenges of Austin Sanders and Billy Howard. Howard swept past Sanders on a late race restart, but could not catch Bernhardt, who had won his heat race as well.

Nick Brown seized an opportunity with a few laps remaining to slide by race leader Jason Burnside en route to his second feature win in V-8 Warriors. The field was sticking to the bottom of the race track and Brown was able to squeeze through without contact in making the winning pass. Wayne Kissam and George Handy won the heat races.

Larry Rarer made it five feature wins in a row, taking the lead on the third lap after starting in the second row of the Q Auto & Injury Attorneys Micro Sprints. Once he got out front, Rarer was never threatened and remains perfect on the year. Doug Dyal was able to hold off the field in the heat for his first victory of the season.

It was a new name in Victory Lane for the second straight time when the checkers fell on the Studio Red Gladiators. Patrick Fiore replaced his original 2019 race car with one that had been retired to a field and it was the right decision. Fiore went wire to wire to take home the victory, holding off Tracey Maynard who claimed the win the last time the class was in action. Kever Raulerson and Daniel Bowman were tops in the heat races.

East Bay Raceway Park will be back in action on Saturday, June 1 with the running of the Prevatt Family Memorial 50 for Pro Late Models. They will be joined by V-8 Warriors, Studio Red Gladiators, Q Auto & Injury Attorneys Wingless Mini-Sprints and Mod Lites. Race time is 6:30 p.m.