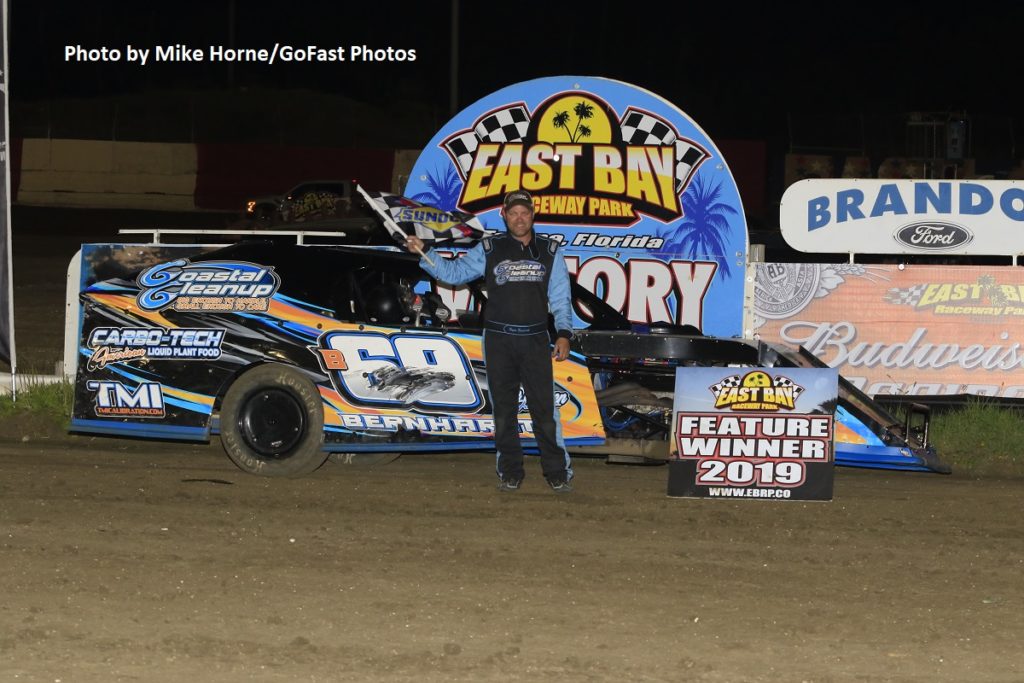 A five-division program marked the return of racing at East Bay Raceway Park after a planned weekend off. The Easter Weekend activity featured a visit by the Easter Bunny and candy for the kids in addition to the on-track action.

Bryan Bernhardt, the 2018 track champion in Gagel’s Modifieds, set the early pace in the 15-lap feature. Bernhardt, who won his heat race, was being chased by heat race winner Austin Sanders from the start. Sanders stayed within a few lengths of the leader through the race, but Bernhardt kept the car pasted to the bottom of the track. Sanders only hope was to move up the middle, which was not a good plan and Bernhardt went on to his first win of the year.

Another defending track champion returned to Victory Lane as Forrest Gough prevailed in the Late Model Sportsman main. Gough ran wire-to-wire for his third main event of the season, backing up his heat win of earlier in the night.

Nick Hebrank made a triumphant return to the Outlaw 4 class with his first feature win of the season. Hebrank started the season in the Street Stock class, but experienced catastrophic engine failure and dusted off the Outlaw 4 for the night’s action. Eric Knight, who suffered a flat tire in the main event, won the heat.

Larry Rarer kept his feature win streak alive in the Micro Sprints, capturing his fourth victory in as many tries for the 2019 campaign. Rarer had to overcome steering issues that had developed late in the heat race and the crew put the car back into perfect racing condition. Rarer took the lead on lap 5 of the 15-lap main and rolled away to a convincing victory. Jerod Meyers and Rich Livernois Jr. won heat races. The second heat was stopped after Chris Livernois Jr. flipped along the backstretch wall on the last lap of the event. Livernois was able to walk away from the crash, but could not compete in the remainder of the program.

Dan Darnell used the high side of the race track to power away from the field in the 12-lap Florida Old Time Modified main.

The racing action continues next week with the running of the Brandon Ford 40, paying $1,500 to the winner of the Gagel’s Modified main. Street Stocks, V-8 Warriors, Studio Red Salon Gladiators and Mini Sprints will join the Modifieds.