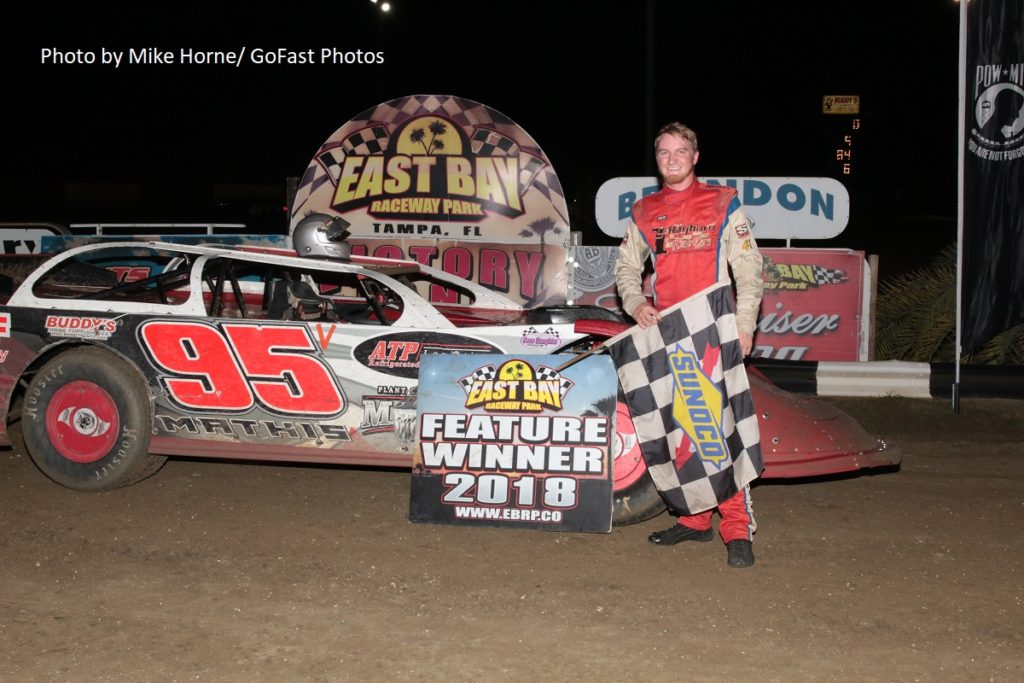 East Bay Raceway Park honored military veterans for a special Saturday night racing program, but it was veterans of track competition who moved to the top of the class in many of the features. Eight divisions were highlighted on the final Full House night of 2018.

Travis Varnadore dominated the Pro Late Model 30-lap feature, winning by nearly ¾ of the race track when the checkered flag flew. Varnadore sliced by on lap 2 after early race leader Phillip Cobb exited with a mechanical issue. Once in the lead, Varnadore faced no challenges, even when the field was bunched for a restart. For Varnadore, it marked his third appearance as a Pro Late Model winner. The best racing on the track was clearly the battle for second with Jeff Mathews and Steve Mathis Jr. trying to settle it. At the end, Wallace Peacock crept up to the two, but could not make a serious attempt at a pass. Mathews ended up taking the second spot.

Point leader Brandon Yates kept his stranglehold on Victory Lane for the Outlaw 4 class, notching his seventh feature win in the 15-lap main event. Yates started the race on the pole and made it very difficult for anyone to hunt him down. Many of the top five drivers experienced brushes with the frontstretch wall, but Yates was able to his car from scraping concrete to score the win.

Defending class champion Jimmy Baker took the lead on lap 5 of the 15-lap Street Stock main to claim his fifth feature win of the year.

Gary Lucas found the right combination to score his first official V8 Warrior win of 2018, outdueling point leader George Handy through the late stages. Lucas, whose steady performances had kept him in the top five in the point standings, took a big leap in the program as the division will have three more nights of racing before a champion is crowned.

Lapped traffic played an unwelcome role in the outcome of the Late Model Sportsman main. Forrest Gough was the early leader, but a strong drive by Bruce Harvey shot him ahead of Gough in the early stages. Harvey could not get much more than a couple of car lengths ahead of Gough. As the race was winding down, the lead dup hit lapped traffic, which caused some anxious moments that ultimately resulted in Harvey falling from the lead. Gough had his own encounter, but was able to stay out front to a win he said he didn’t really want to claim.

Dusty Cates made a return visit to Victory Lane in Mini Sprint action, topping the 15-lap main. It was his second feature win of the year in limited starts.

The night concluded with a first-time winner in Gladiator competition. Brittany Hart, who had finished second in each of the last two Gladiator clashes, would not be denied. Starting on the inside of the third row in the 15-car feature, Hart was able to work steadily through the field and slipped past race leader Ricky Rutledge Jr for her first feature win in her first season on dirt. She told the crowd she was not racing asphalt any more.